For this unique blend, Dunbarton owner Steve Saka has reportedly undergone the process of specifically blending a unique cigar that will pair perfectly with steak dinner—thought to be the first time such a blending procedure has been attempted.

This is one of those projects that I was beyond excited to do. Cigars and steaks go hand in hand, but to my knowledge, no one has ever actually developed a blend specifically created to be enjoyed intentionally together as a ‘pairing’. You would think this would be a rather straightforward task, but I took the responsibility very seriously in the selection of the various tobaccos to best compliment the hearty nature of the beef. It required the sacrifice of many fine heads of locally sourced beef!Steve Saka, Owner of Dunbarton Tobacco & Trust

Saka blended the Red Meat Lovers Club at the Nicaraguan American Cigars, S.A. (NACSA) factory in Estelí (the same location used for the Mi Querida and Umbagog cigars), pairing the blend with the country’s highest grade beef—”chuleta de dos lomos.” The final selection features a Connecticut Broadleaf No. 1 Dark wrapper from the USA, a Negro Oscuro binder from Mexico, and a diverse filler selection from Nicaragua and Pennsylvania. The cigars are said to be “Level 3” in terms of strength (i.e. very strong), with suggested flavors of “charred meat, earth, dark chocolate, fat, and the elusive umami.” When Abe told me that my organization, Red Meat Lovers Club, was selected as a partner in this cigar project, I had to put down the bone-in ribeye I was eating for breakfast, and I yelled out, ‘that’s delicious!’Evan Darnell, aka “The Secretary of Steak” for the RMLC

As with all previous Microblend cigars, Red Meat Lovers Club is very limited, with only 500 bundles of 10 cigars being made for a one-off release. The blend has been rolled in a singular toro gordo size (6″ x 56), featuring a small pigtail cap that is known as a “Rosette Pigtail.” The cigars are scheduled for a release of January 17th, being sold exclusively through Smoke Inn’s online store, as well as some of the company’s physical locations throughout Florida. Pricing has been set $11.95 per cigar. 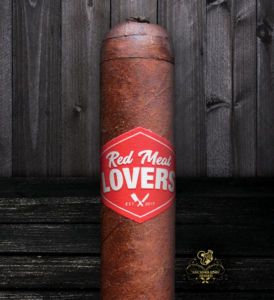