I’ve played dominoes all my life. My grandmother would play with me for hours. It started with my Mickey Mouse dominoes, which was nothing more than a glorified matching game with pictures of Mickey Mouse matching another Mickey Mouse, etc. This morphed into more traditional domino games. Today, my wife and friends play a lot of board games—one of our favorites: Mexican Train.

The CAO Bones draws its inspiration from the popular game. A common vernacular for the pastime refers to the game pieces as “bones.” The roots of the nickname goes back to early versions of dominoes being made from animal bones or ivory. The vitola names for CAO Bones are also popular domino games: Chicken Foot, Blind Hughie, Matador, and Maltese Cross.

Despite my origins with dominoes, any time I hear the word, my mind always goes to Bernie Mac’s character in Ocean’s 13, Frank Catton. “All you got to do is feel it!” So, in the spirt of Catton, that’s enough of the back story and onto the review. ‘Nuff said.

Bones is manufactured in Nicaragua and boasts plenty of Connecticut tobacco. The cigar’s wrapper and binder are both Connecticut varietals from the Connecticut River Valley—one being Broadleaf and the other Connecticut Shade. The remainder of of the cigar has an international variety to it. The filler is comprised of four tobacco leaves: Honduran Jamastran, Honduran La Entrada, Nicaraguan Estelí, and Dominican Piloto Cubano.

Bones is adorned with a glossy black label. The trademark CAO logo is in a silver reflective color. “BONES” is block font and the same finish and look as the CAO logo. While there is simplicity to this design, I am disappointed that the domino is actually hard to pick up unless you know what you’re looking for.

The wrapper is incredibly toothy, with several protruding veins, giving it a highly rustic look and feel. There is some oil to the wrapper, but not as much as one may expect, considering the dark nature of the cigar. I use a guillotine cutter to cut the cap off, and upon further inspection, I am hit with interesting aromas on the unlit foot. I pick up notes of sugar, damp cedar, and faint pepper. As many know, there is quintessential density to Connecticut Broadleaf. The wrapper on Bones is quite brittle, and therefore, also surprising. 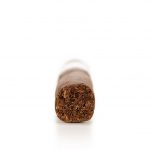 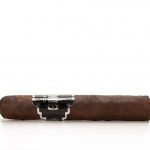 With a light, the aroma off the toasted foot is similar to the pre-light, with cedar, burned sugar, and pepper. Upon the first few puffs of the cigar, I am met with straightforward notes of charred wood, earth, and pepper. The pepper is amplified in the retrohale, and battles with the charred wood note for dominance. The draw is very open, without almost any resistance, and the smoke output is very impressive. 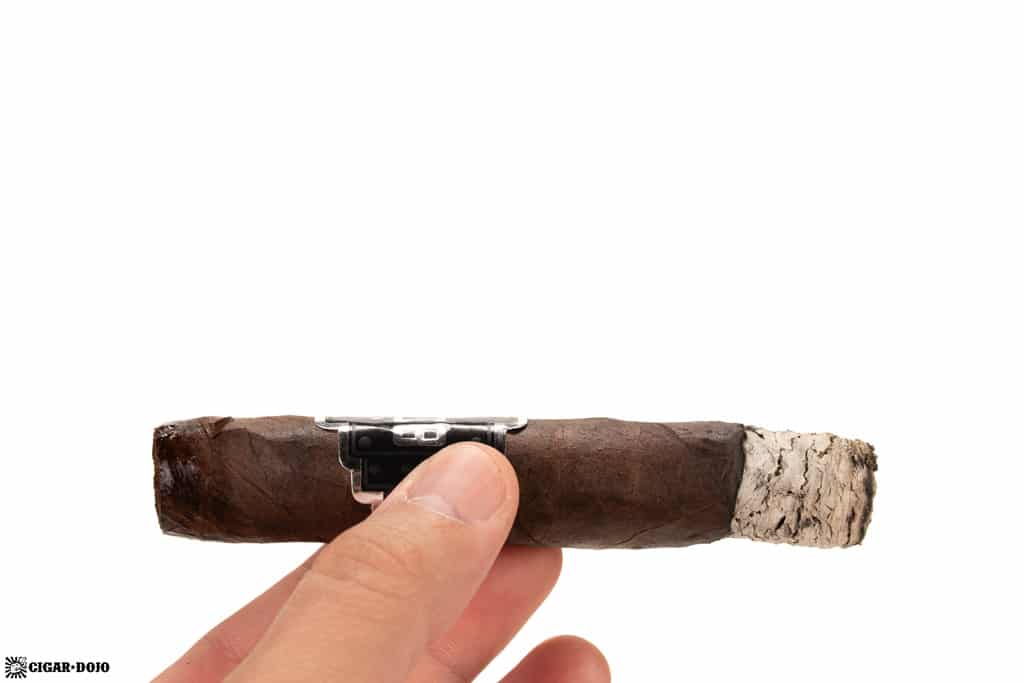 As the cigar progresses, the charred cedar notes begin to overwhelm the palate, but thankfully bitterness stays at bay. The construction of the cigar is textbook, but i am surprised at the rate of burn that this cigar is moving at. I feel like I’ve only been smoking this robusto for less than a few minutes, but I find myself close to the halfway mark. There is some decent balance to the cigar, considering the charred cedar notes not morphing into bitterness, which seems to be due to the sugar sweetness that counteracts it.

I cannot believe how quickly this cigar finishes. The finale of Bones finally welcomes in some bitter notes that dominate the palate as the pepper remains present. Earthiness and pepper notes continue to run rampant as the cigar wraps up. The retrohale begins to burn hot as the pepper notes fade away. The finish is short and non-lingering. 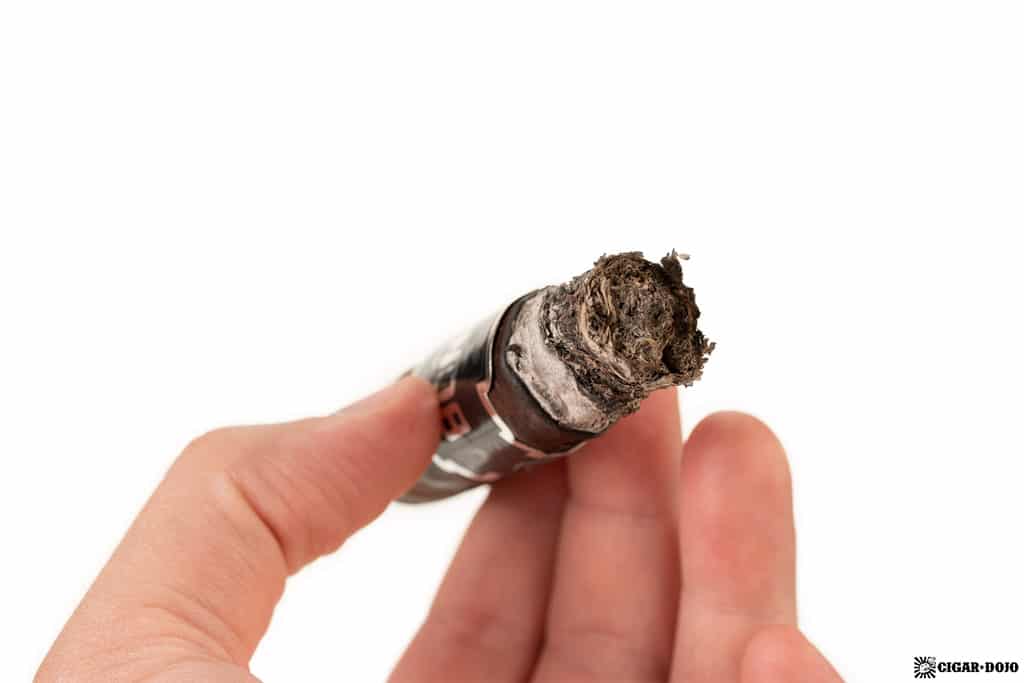 This is almost verbatim from my CAO Session review: as many of our readers know, I am a huge cigar-aging nerd and I have to wonder what some six months to two years would do for this cigar. If anything, my hope is the cigar slows down a lot. That being said, I would smoke this cigar again, but only after some time. 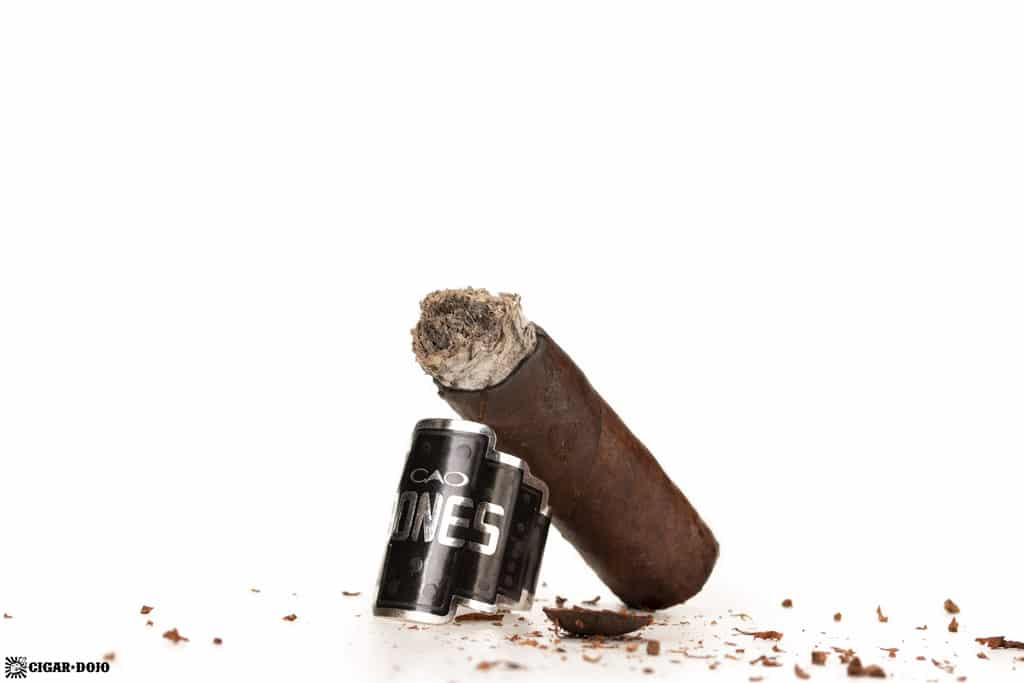 CAO Bones Chicken Foot
I’m in awe at the speed in which this cigar smoked. I also was shocked at how brittle the wrapper was. While the flavors were not unpleasant, the lack of depth and complexity really diminished the experience. If you like really subdued cigars, it’s worth a try.
Appearance89%
Quality/Build84%
Draw90%
Flavor85%
Complexity77%
Price/Value87%
Pros
Cons
2021-06-03
85%Straight Forward