Like many cigar smokers today, I can fondly remember my first cigar—a Macanudo that my father gave me on our first road trip together. Somewhere between Chicago and the Smoky Mountains (befitting), a gas station humidor pickup opened a whole new world for me. That was June 18th, 1992. Macanudo was still made in Jamaica back then, but other than the country of origin, not much has changed for that particular café au lait-hued, green-banded classic. The cigar industry has changed immensely from that time, however, and therein lies a challenge for General’s (parent company) flagship brand in the modern cigar arena. The evolving landscape of tobacco growing, processing, and cigar manufacturing has led to ever-increasing styles, with smoker’s palates evolving accordingly. How, then, to stay relevant, without losing one’s roots?

The Macanudo brand itself has been around for 50 years, and in the last few years, they’ve introduced the Inspirado line (orange, white, and black) to offer a more modern take on the iconic name; the goal being too appeal to the contemporary cigar smoker. Ushering in a slew of updates to Macanudo for 2018 (coinciding with the brand’s 50th anniversary celebrations) is the Inspirado Red—the fourth cigar in the quickly-growing series.

As we celebrate the 50th anniversary of Macanudo, we created Macanudo Inspirado Red to speak to the brand’s unique ability to adapt to the preferences of today’s cigar lovers. Nicaraguan cigars are hot right now. With ‘Inspirado Red,’ we show how nimble the brand can be by introducing a unique, Nicaraguan-forward blend to the line, while highlighting the expertise of the torcederos from our cigar factory in Esteli.José de Castro, vice president of marketing for Macanudo

In my opinion, the blend of tobaccos does sound great. I’ve been looking forward to another standout cigar boasting Ometepe-grown tobacco—being one of the lesser-used regions of Nicaragua, yet displaying some of the country’s most unique flavors.

This particular review cigar has a nice square press and a clean double cap, while a couple of other samples have shown uneven seams that are slightly curled at the edges. For a pressed cigar, this is surprisingly dense and hefty and lacks the squishy spots that can be common in box-pressed cigars. The rough-to-the-touch wrapper features uneven coloration, ranging from “cinnamon stick brown” to nearly black in some spots—each sample sparkling with oil. It is a rustic cigar with an elegant press.

The band, well, it’s the same as the other Inspirado bands, only red. It features some of the design elements of the classic Macanudo band in such a way that makes it look like cheap clip art. I’m not a fan. For a cigar that is to celebrate 50 years of the brand, you’d think they could’ve done better.

Note: review photos show a straight cut, while the cigars used for tasting notes were cut using a V-cut

I generally tend to prefer a V-cut with box-pressed cigars, as they typically seem to have a more open draw and don’t disturb the cigar’s pressed shape. Considering the dense filler with these, the cigar still performed well with a V-cut, despite one sample having a slightly tight cold draw that opened up nicely after lighting. The wrapper smells of cinnamon and chile peppers, while the foot and cold draw don’t give much except some generic tobacco and sweetness.

The first third starts with a mixture of à la carte flavors. There’s a spice that is really only a factor in the retrohale. This is joined by an espresso sweetness on the tip of the tongue. And that’s kind of it, at least to begin. My first sample had a great deal more spiciness than this particular smoke, which gives this one a better balance, but I’m still waiting here for these flavors to kick into gear and begin to work together. It’s a pretty flat beginning. The burn line is perfect, and the ash is solid and stacked. The cigar’s crawling first third takes 30 minutes, registering as medium in flavor, strength, body. 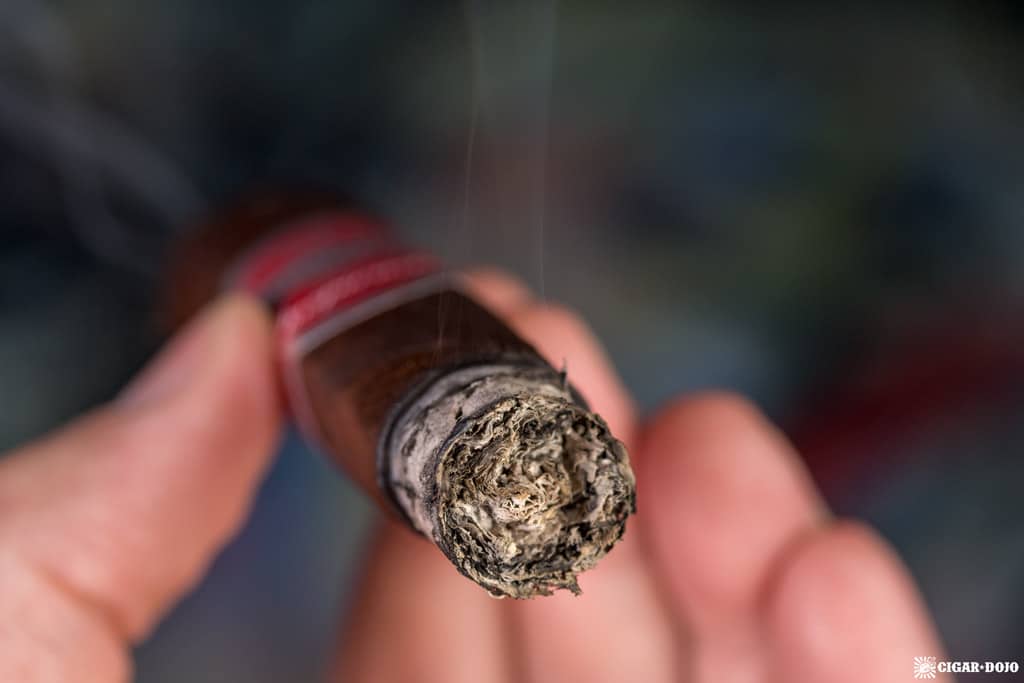 More flavors begin to join the fold moving into the second third, including cocoa and a charred cedar. These attributes directly follow the first really interesting flavor thus far, that being a combination of yeasty, creamy, tangy, and sweetness; a combination that reminds me of sourdough toast soaked in butter, with honey and bright pops of sea salt. My overall impression thus far is that the flavors only want to come alive, but they don’t quite get there. Notes of I-don’t-know-what-that-was-but-it-seemed-like-it-would’ve-been-good send cryptic messages to my tongue, disappearing before I can decipher them. Smoke output is great, but the smoke itself is uncharacteristically thin, weak, and somewhat acrid, with really no lingering finish whatsoever aside from the honey-like sweetness. A hint of marzipan shows up near the end of the second third, but it’s quickly overridden by a soon-to-be-dominant cedar flavor.

There’s cedar, coffee, cocoa, marzipan, and more cedar in the dry, thin, flat smoke of the final third. Toffee/caramel sweetness shows up and, again, it seems like this cigar wants to get up and be somebody, but then decides that it’s fine just hanging around the house playing video games and smoking weed (yes, the cigar itself is smoking a joint in this bizarre metaphor—you’re welcome). The smoke has a really nice aroma—a positive assessment pulled from an otherwise monotonous experience. Even in the retrohale, there’s practically no additional sensations to report. At one point, I mistakenly think the cigar is about to get interesting, when roasted coffee beans and burnt sugar take the wheel, but they simply mashed the gas pedal to the floor and sped off, gone from the scene…

Nearing the end, the toffee and almonds and cocoa give it a fleeting moment of Heath-bar greatness, but cedar notes are quick to knock it all down like a mean toddler during “building time” at daycare. Rather than doing something productive—being a part of the blend—and being rewarded with praise, cedar is content to smash everything else and have all the attention for itself. The spice, mostly gone since the first third, comes back in sensation (not in flavor) with one inch remaining.

Probably not. All the buzzwords from the marketing material turned into a buzzkill of non-delivery. Considering the cigar was released as the company’s 50th anniversary offering, it really just felt like they tried to cram everything into the cigar, ticking all the boxes of “what’s hot right now.” This cigar was a dud, for me. And it’s not like I’m hating on Macanudo; you’ll remember a few months back I had the pleasure of reviewing the Macanudo Inspirado White, which I thought was truly excellent. This, however, just completely misses the mark, which is only made worse by the missed opportunity to do something really special to celebrate the 50th anniversary of one of the biggest cigar brands in the United States, if not the world.

Macanudo Inspirado Red Robusto
Remembering back to my recent pleasure reviewing the Inspirado White (Inspirado Red's predecessor), I was looking forward to this one. Add to my excitement the blend of aged/vintage tobaccos, I was salivating with the prospect of the cigar's potential. Perhaps my high expectations are responsible for my eventual disappointment with this cigar. I only mention this because I know a lot of people would write this cigar off, sight unseen, simply by nature of it being a Macanudo/General cigar. But I was hyped and willing to fully embrace this cigar. Unfortunately, the experience flat-out lacked personality. From the lackluster band (50 years and this is the best you can come up with?!), to the over-hyped marketing speak, to the cigar experience itself, it just seems…contrived. Like someone in a boardroom concocted the blend based on a spreadsheet of inventory and market share. Whereas the Inspirado White seemed to achieve General's goal of creating a Macanudo that could speak to the modern smoker, the Red seems to be more of an attempt to make a Nicaraguan-based cigar for Macanudo smokers. As for the enthusiast/cigar nerd, I doubt they'll win any converts to the brand with this offering.
Appearance85%
Burn/Construction90%
Draw90%
Flavor80%
Complexity75%
Price/Value85%
Pros
Cons
2018-05-23
84%Nicaraguan for Dummies