The ubiquitous device that we know as a “Barber Pole” has an interesting and unique history. In medieval times, barbers also performed bloodletting, tooth extractions, and surgery on their customers. During bloodletting, the “patient” was instructed to tightly grip a staff to increase blood flow. After the bandages were removed following the procedure, the barber would typically hang the blood-soaked white cloth on a pole outside his shop. A prevailing wind would sometimes wrap the cloth around the pole, producing a helix of red and white. In 1540, the Fellowship of Surgeons merged with the Barbers’ Company to form the Company of Barbers and Surgeons of the City of London. One of the organization’s statutes required a barber to use a blue and white pole outside the shop, while a surgeon mounted a red and white pole. Currently in the United States, the barber pole is usually red, white, and blue. One interpretation of these chosen colors is that red represents arterial blood, blue represents venous blood, and white represents the bandage. Another interpretation is that the pattern pays homage to the United States Flag. The term “barber pole” is also now used as a metaphor to describe objects in other contexts.

Sometime after the establishment of commercial cigar manufacturing, a creative torcedor had a brainstorm—using two leaves of contrasting colors to encase a cigar’s binder and filler. This technique produced a visually unique cigar resembling a “barber pole” helix, while adding smoking complexity due to the utilization of two different wrappers. In the ensuing years, most major cigar companies have added a “barber pole” blend to their offerings—usually on a limited-production or a seasonal basis. The cigars are eye-catching while residing in a tobacconist’s humidor and conversation-starting when smoked in public.

For a number of years, Quesada has manufactured a “barber pole” version of its Reserva Privada blend for the annual ProCigar charity auction. Last year, the company produced a corona gorda vitola especially for the fifth-anniversary celebration of Fine Ash Cigars in Avondale, Arizona. Recently, Quesada rolled out the Reserva Privada Barber Pole to other retail tobacconists on a limited-production basis. 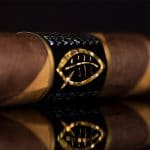 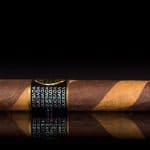 The Quesada Reserva Privada Barber Pole is the initial national release of the blend, following the shop-only exclusive manufactured for Fine Ash Cigars in 2016. This line of cigars is offered in three sizes—the Robusto (4¾” x 52, $13.60 MSRP), the Toro (5⅝” x 54, $14.65 MSRP), and the Corona Gorda (5¾” x 48, $12.98 MSRP). The Corona Gorda is available only at Fine Ash Cigars, while the other two vitolas were offered to the remainder of Quesada’s retail accounts. Both the Robusto and the Toro were produced in limited quantities—300 boxes of 10 cigars (per size). The vitolas are shipped in study wooden boxes with a highly-lacquered, hinged lid.

The cigars are composed with a “barber pole” wrapper which utilizes two distinct leaves—a Connecticut Broadleaf Oscuro and an Ecuadorian Connecticut Shade. Beneath this resides a Dominican San Vicente binder from a crop harvested in 1997. This binder is also used in the construction of the company’s regular Reserva Privada and Reserva Privada Oscuro. This crop was planted and picked by Manuel Quesada, Sr. before he passed away in 1998 and allowed to age. The filler blend consists of Dominican San Vicente (also from the 1997 crop) and ligero tobacco from Pennsylvania.

The Quesada Reserva Privada Barber Pole Robusto is a striking-looking cigar, its length one-quarter inch shorter and its ring gauge two points higher that a vitola normally receiving the robusto classification. The cigar’s wrapper combination is a bit rough—with raised-edge seams, three large veins, two slight tears on the Ecuadorian Connecticut Shade leaf, and a touch of tooth on the Oscuro portion. Its color alternates between Sandy brown and taupe, with contrasting splotches of sepia residing within the Ecuadorian Connecticut Shade leaf. A medium amount of oiliness produces a tactile sensation when rolled between the fingers.

The Barber Pole is encased with a traditional rectangular band printed in the colors of black, gold, and silver. Residing in the center is a lightly-embossed, holographic reproduction of the company’s tobacco leaf logo. Flanking the left of the logo is the word “QUESADA” while “RESERVA” flanks the right. Both words are repeated eight times in a horizontal fashion. In a smaller font, “HECHO A MANO” is printed on the left side of the repetitive “QUESADA” banner and “LICEY REP, DOM.” sits to the right of the “RESERVA” banner.

Firmly packed from the foot to the cap, the wrapper aroma combines cocoa, coffee, and leather, while the open foot smells of hardwoods, hay, and light manure. After the cap of the robusto is opened with a double guillotine cut—to ensure the maximum amount of taste from the wrapper, binder, and filler—the initial cold draw is quite open. Flavors of cedar, chocolate, cream, and red pepper immediately touch the palate.

After toasting and lighting the cigar with a soft double-flame lighter, the first few draws deliver notes of hay and mustiness, which is usually characteristic of aged Dominican tobacco. These initial flavors are quickly enhanced with touches of cedar, coffee, dried earth, and natural tobacco. The draw of the robusto is very open—perhaps too open—generating an above-average amount of smoke output. Additional aromas and flavors of assorted nuts, cocoa powder, and dried fruits mingle with the primary notes, while must and red pepper are dominant on the retrohale.

As the Barber Pole enters into its second third it begins to display the following general characteristics—medium in body, medium in strength, and medium in flavor. The aromas and flavors present in the first third of the cigar continue to dominate the profile, while a cherry and carbonated soda note appears at intervals, like the Cheerwine soda I drank as a kid when visiting relatives in North Carolina. The smoke is rather dry, requiring frequent sips of San Pellegrino—my preferred beverage when reviewing cigars.

Room aroma is a rather delicate combination of old paper and natural tobacco, reminiscent of sitting next to a cigar smoker wearing a woolen overcoat which has never been dry cleaned in a small reading room at a used book store. The burn line wavers a bit, holding an inch and a half of flakey nickel ash, highlighted with streaks of onyx between the stacks. On the retrohale, the must and red pepper present in the first third is enhanced with a quality which can only be described as fizzy.

As it burns through its final third, the Barber Pole begins a slow stall. The draw becomes extremely open, requiring delicate and controlled puffs to prevent the cigar from overheating. A strong amount of bitterness and saltiness develops as the robusto inches its way toward the nub, prompting a search in the refrigerator for a sweeter beverage pairing. After a few more draws, the cigar is placed in an ashtray and allowed to incinerate.

The answer to that question is, “Probably not.” While the Quesada Reserva Privada Barber Pole Robusto is an eye-catching cigar with a unique history, it delivers a smoking experience that makes its price point hard to justify. Normally, I would suggest aging a few, but since the major tobacco components are nearly twenty years old, I don’t think that the cigar will develop additional complexity. For me, the Manuel Quesada 70th Anniversary is currently my preferred blend from the company. 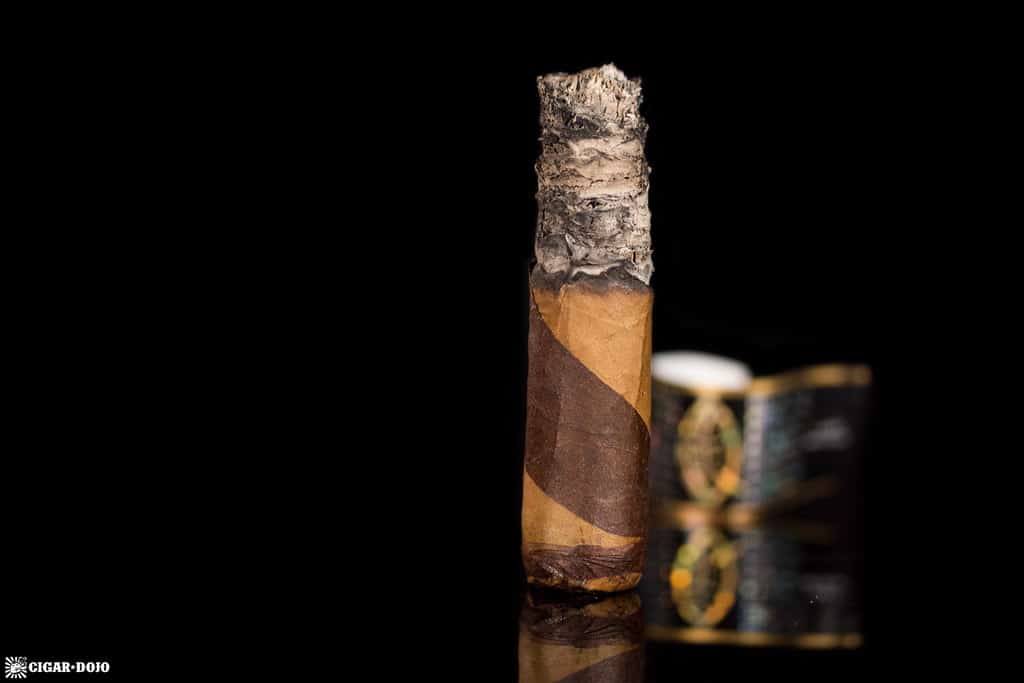 Quesada Reserva Privada Barber Pole Robusto
Quesada Reserva Privada Barber Pole is the company’s first nationally released blend utilizing a “barber pole” wrapper, following the Quesada Reserva Privada Barber Pole Corona Gorda—which was exclusive to Fine Ash Cigars in Avondale, Arizona. Encased with Broadleaf Oscuro and Ecuadorian Connecticut Shade wrapper leaves, the blend features Dominican San Vicente tobacco which was harvested in 1997 for the binder. This highly-aged tobacco is also present in the filler, along with Pennsylvania Ligero for additional body. The Barber Pole Robusto delivers primary notes of cedar, coffee, hay, must, and natural tobacco. During the second third, the unique taste of cherry carbonated cola appears at intervals. While well constructed, the cigar burns quite rapidly and lacks the complexity usually associated with its price tag. It is approachable by both the novice and the more experienced cigar enthusiast.
Appearance93%
Burn/Construction89%
Draw87%
Flavor89%
Complexity88%
Price/Value84%
Pros
Cons
2017-10-24
88%Mainstream