Before Sean Williams was announced as the new face of Cohiba and even before the Cohiba Blue was introduced to the public, General Cigar Company (parent company of Cohiba) teased the cigar’s release to the cigar media at a special tour of their Dominican factory, in January of this year. Indeed, this is where the cigar’s unusually vibrant, blue boxes were first displayed, hinting at the matching band that would accompany it. Word was that the cigars would fill the gap of an entry-level Cohiba offering—not to say the cigars would be cheap, simply more attainable for those looking to become acquainted with the well-known Cohiba (aka “Red Dot”) brand.

The cigars would eventually make it to retailers in mid-April, sporting a vibrant, yet simplistic blue design and a price point of $9 to $11—a decent reduction compared against the $14 to $20 range from similar-sized cigars of the traditional Cohiba lineup.

At the previously mentioned tour of General Cigar Dominicana, there were two new projects that had been teased, with the company’s latest addition to the legendary Partagas brand receiving most of the attention. This cigar materialized as the Partagas Heritage, boasting a new wrapper that had been worked on over the past ten years in collaboration with the Plasencia family. This proprietary leaf was grown in the volcanic soils of the Olancho San Agustin Valley in Honduras and was subsequently dubbed “OSA.”

But while the proprietary OSA wrapper became one of the major selling points of Partagas Heritage, it is the Cohiba Blue that takes the tobacco to a further level; showcasing Honduran OSA on both the wrapper and binder components of the blend.

To achieve the desired flavor, they began with a silky, rosado-hued Honduran Olancho San Agustin (OSA) wrapper and took a unique approach by selecting Honduran OSA for the binder as well. The layered wrapper-binder deepens the smoking experience and imparts subtle, earthy notes.General Cigar Co. 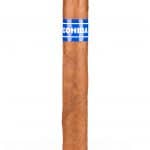 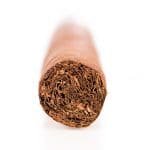 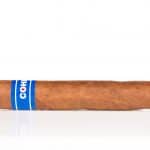 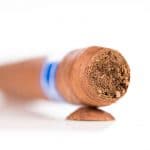 Similar to the Partagas Heritage, Cohiba Blue embodies a reddish, clay-like hue from the cigar’s wrapper. The cigar feels fairly sturdy (around medium-firm bunch), though some samples showed subtle soft spots with a gentle squeeze. On the surface, there are light veins and slightly loose seams, finalizing with a well-placed cap that appears to be only single or double capped. On the touch, the wrapper is slightly fuzzy, making for a good feel prior to cutting/lighting.

Perhaps more noticeable than the tobacco itself is the cigar’s design; which has swapped the traditional black and cream color scheme for an unusually vibrant blue. In my experience, cigars of this look are typically highly glossed, embossed, and balanced with metallic highlights. This is not the case with Cohiba Blue; the cigar proudly boasts its vibrant blue hue (similar to a Brandeis/Azure shade) with little more than the airbrush paint coat seen at General’s box factory. In my opinion, this was a bold move that really works for this brand and I appreciate the simplistic innovation of this appearance. 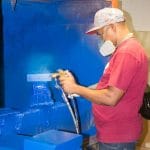 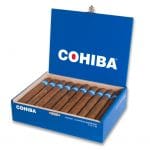 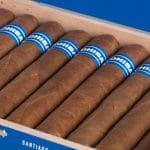 On the nose there is a general leather/musk aroma, complete with toasted cedar on the cigar’s foot. A double guillotine cut reveals a draw on the firm side, showing pre-light notes of stone fruit, chocolate, generic tobacco, and mustiness.

One of the aforementioned qualities of the cigar—toasted cedar—carries through into the actual smoking experience, leaning more towards the toasty side than cedar wood. Surprisingly, there is almost no spice detectable, even through the retrohale. Burning into the quarter-inch mark and up until the half-inch mark, additional nuances begin to develop as cedar (on the palate) and citrus and cream (in the retrohale). Unfortunately, the pre-light draw was indicative of the smoking draw, offering medium amounts of smoke through a medium/firm draw—double puffs are required to pull the desired volume of smoke. 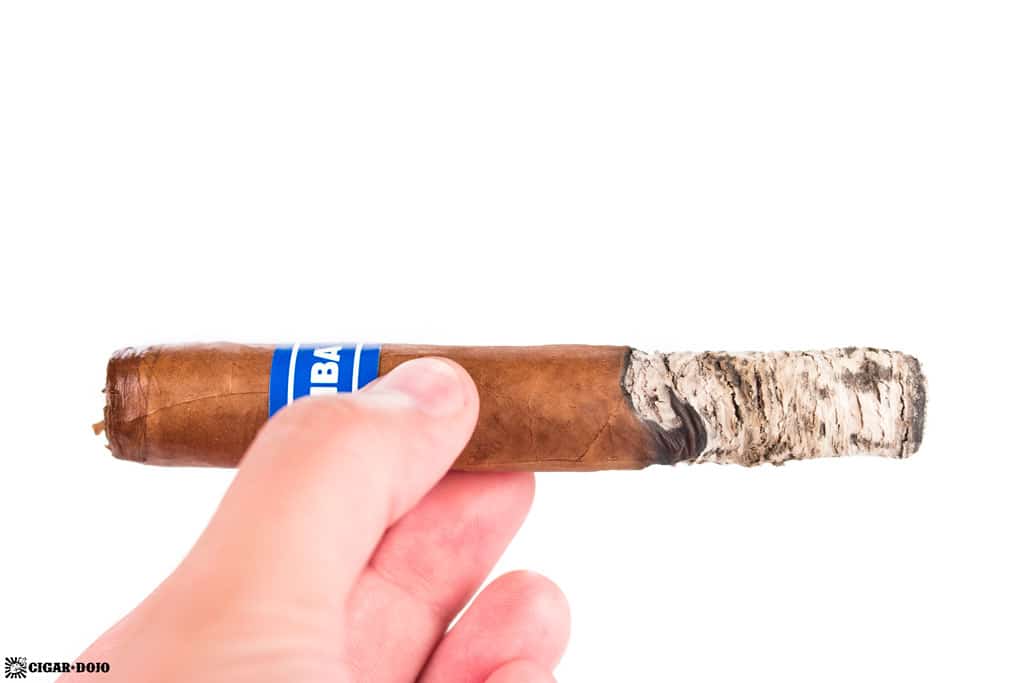 The cigar’s overall profile is on the dry side, lacking any sweetness for balance. Through the one-inch mark, the entire profile (flavor/strength/body) lies within the mild to medium range. Suddenly, around the half-inch to one-inch mark, there is a very distinct peanut butter note that dramatically improves my outlook of the smoking experience. Construction-wise, the Cohiba Blue is on point, displaying a straight burn and fairly solid ash that holds upwards of two inches.

There is an affluence of aromatic, nut-like nuances—with peanuts and nutmeg spices hanging in the air and through the nostrils. Around the halfway mark, the cigar finally builds a decent amount of spice (decent as in detectable—still small in comparison to many of today’s profiles). Many of the flavors are retained throughout the entire smoking experience, though the actual notes begin to darken past the half-point. Charred nuts, perfume, and a slight tanginess are the most noticeable flavors nearing the end—though it becomes difficult to keep the cigar cool, with over-heated, harsh notes creeping in accumulatively as the burn line approaches the cigar’s band.

I’m going to go with a soft “maybe” on this one. The cigar displays interesting and enjoyable flavors throughout the first half, but its lack of spice, combined with mild body and dry texture require a diligent palate in order to find the hidden nooks and crannies of enjoyable flavor. The construction seems a bit of a wash, as the burn line is great but the draw is poor at best. At the entry-level price point of $9, I find myself struggling to justify a future purchase. But if I were ever handed a Cohiba Blue, I wouldn’t hesitate to smoke it. 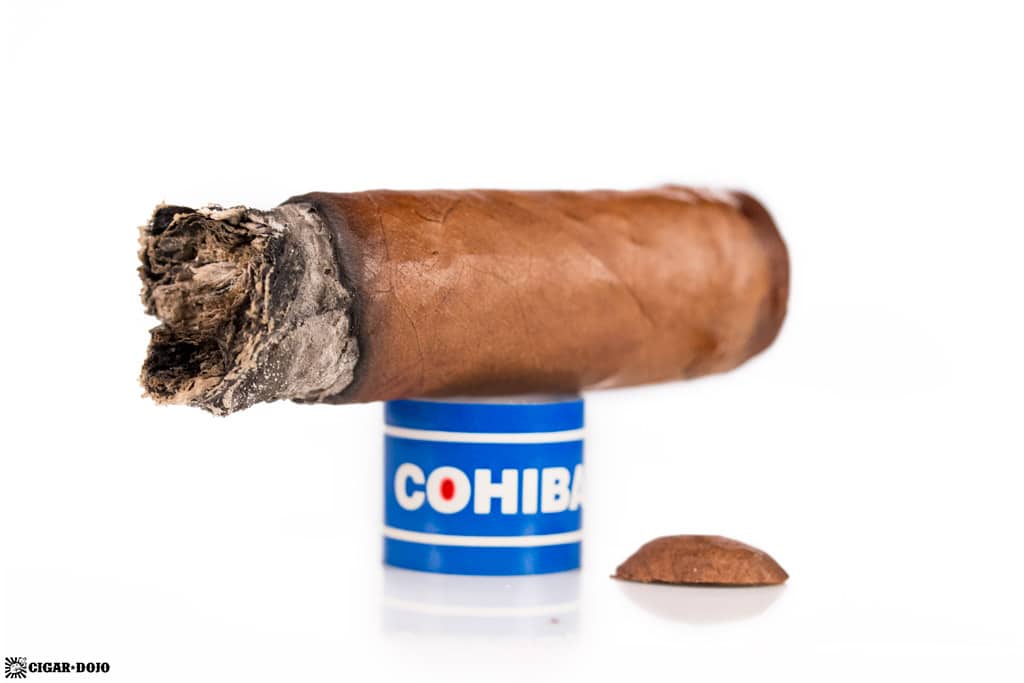 Cohiba Blue
Cohiba Blue takes a bold approach, offering the latest addition to the well-known line in a vibrant , yet simplistic, blue presentation. The design is eye-catching and will most likely persuade even the cigar's critics to put the new blend to the test. The outcome? We found the cigars to showcase light and interesting flavors throughout the first half—with a sudden turn towards dark and occasionally overheated flavors in the second. Cohiba Blue's shining moment was a striking note of peanut butter within the cigar's fist inch. This combined with an impressive construction/burn to summarize the cigar's most decisive moments. It was a tight draw, general lack of sweetness (to balance the overall dry smoking texture), and lack of progression/darkening/harsh-ities in the second half that pulled our score down a few pegs; making for a slightly difficult recommendation when taking the cigar's relatively high price point into consideration.
Appearance95%
Burn/Construction97%
Draw77%
Flavor88%
Complexity82%
Price/Value80%
Pros
Cons
2017-06-16
87%Feeling Blue