Apart from representing a municipality in central Cuba, with a Latin translation to mean “Holy Spirit,” Sancti Spíritus (pronounced sônktē spērēto͞os) is best known among cigar hobbyists for its increasing popularity in premium cigar blends. This holds especially true for Pete Johnson and the García family, whom have included the tobacco varietal throughout a growing number of their blends over the past few years. My Father El Centurion, Tatuaje The Jekyll, and L’Atelier Imports are among the most recent to feature the leaf—which is a hybrid creation using Criollo and Pelo de Oro seeds.

But while the García’s own brands and Johnson’s first brand, Tatuaje, have dabbled with the seed, it is Johnson’s more recent creation, L’Atelier Imports, that has taken the hybrid to new heights. In fact, L’Atelier has incorporated Sancti Spíritus within a portion of nearly every blend to date, including: LAT (wrapper), L’Atelier Selection Spéciale (wrapper), L’Atelier Maduro (binder), La Mission (filler), Extension de la Racine (binder and filler), Côte d’Or (wrapper), and Côte d’Or La Tâche (wrapper).

In this way, Sancti Spíritus is at the core of L’Atelier Imports—or, to phrase it another way, it is their identity. This is the concept L’Atelier debuted at IPCPR 2016, showcasing simplistic, black boxes of twenty cigars dubbed “Identité,” which is French for “Identity.” 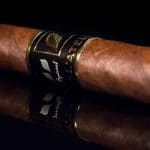 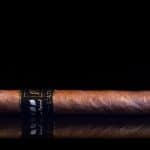 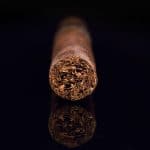 With Sancti Spíritus identified as the identity of L’Atelier, it becomes paramount that the blend make good use of this special leaf—which it does, as L’Atelier boasts Sancti Spíritus throughout every portion of the blend: wrapper, binder, and filler. L’Atelier describes the resulting blend:

Utilizing the unique profile of the Sancti Spíritus leaf in all three aspects of the blending process, Identité is transformed into a rich and very complex, medium to medium-full bodied smoke.

To accomplish this, L’Atelier has selected the same high-priming Sancti Spíritus wrapper used on their Selection Spéciale cigars, which is grown in Ecuador by the Oliva Tobacco Co. The cigar then features a double binder, as is the case with all García-made cigars. Both leaves are Nicaraguan, but only one is further specified, using Sancti Spíritus from the García’s farms in Nicaragua. The same can be said for the cigar’s filler, offering an all-Nicaraguan blend, including García-grown Sancti Spíritus.

L’Atelier Identité features a look nearly identical to the brand’s original LAT and LAT Selection Spéciale cigars, offering a black box with gold highlights; the only real difference being a slide lid instead of the usual metal clasp. The bands follow suit, using a simplistic look that displays the company’s tobacco leaf logo in gold ink. The key difference between Identité’s band and the original LAT is that the band is void of a white background behind the word “L’ATELIER.” There is also new subtext on both sides of the leaf logo, reading “Mélange Spécial.” The term translates to mean “special mixture” or “special blend,” and each of the three sizes in the series are titled Mélange Spécial No. 1, 2, or 3.

The Mélange Spécial No. 2 is a 5⅝″ × 46 corona gorda, displaying the cigar’s dark-chocolate-hued wrapper with a glistening coating of oil from head to toe. The attractive wrapper showcases thin veins and nary a blemish in sight. Construction is on point as well, displaying a triple cap, well-placed seams, and a medium bunch that feels very consistent.

The wrapper has fairly strong notes of leather and barn musk, with a sweeter brownie batter note on the open foot. The pre-light draw has a medium-firm resistance, showing slightly spicy notes of mineral, cedar, and citrus. The spice is amplified by the cigar’s oily wrapper, coating the upper and lower lips and giving a prickling sensation.

Identité Mélange Spécial No. 2 ignites with a fiery blast of pepper spice. It is sharp and very intense, having a wasabi or horseradish-like zing, which creeps its way down the back of the throat and warms the chest. Black pepper dominates the retrohale and palate for a good portion of the cigar’s beginning, with background notes of green vegetables, mineral, and a distant chocolate note.

The cigar maintains the medium-firm draw resistance experienced in the pre-light portion—it is slightly too tight but certainly manageable. This produces medium to medium-light smoke output, offering a dry mouthfeel. To contrast this, the cigar’s oily wrapper coats the lips, adding a butter/salt/spice sensation. The burn line is wavy and amounts to a touchup at about a half-inch in. This marks a turning point in the profile, as the black pepper onslaught pulls back, allowing for a more subdued and complex experience. Where quick retrohales were required at the start, the smoke can now be held for long durations in the nostrils—which is where the bulk of the profile resides. 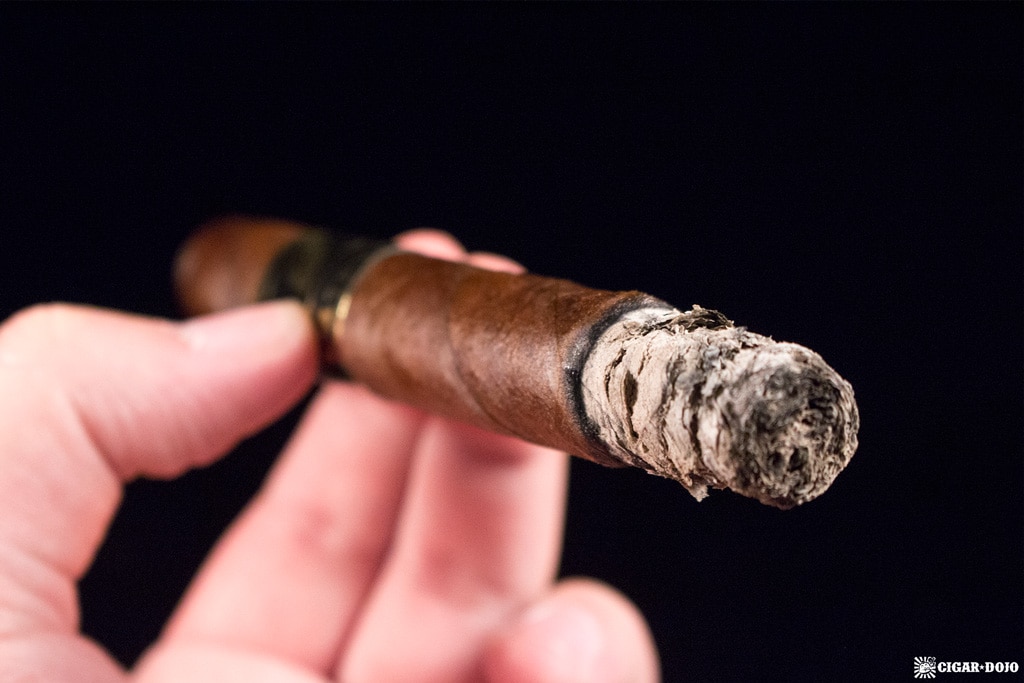 The flavors are fairly nuanced and could be pegged around medium, offering notes of mellow black coffee, belle peppers, “new car” leather, and crushed black pepper. The cigar’s ash holds in flakey, one-inch chunks, having a medium gray tone with streaks of near-black. The ash has to be manually tapped at around one inch, clearing the cigar’s foot for a full relight. This opens up a brighter profile, showing cedar, citrus, and musk cologne (this combo is noticeably amplified with a sip of bourbon), as well as a long and satisfying dark chocolate and vanilla finish.

There isn’t much change from this point (other than a slightly darker profile and notes of charred oak) up to the halfway mark, where the cigar meets its second full relight. At this point the flavors seem to slowly pull back, being replaced by a growing strength that warms the chest. This marks a steady progression (or degression) towards darkness—with dark chocolate, anise, mineral, dark toast, and occasionally harsh notes from overheating. The profile finishes at medium flavor, medium-plus strength, medium body. 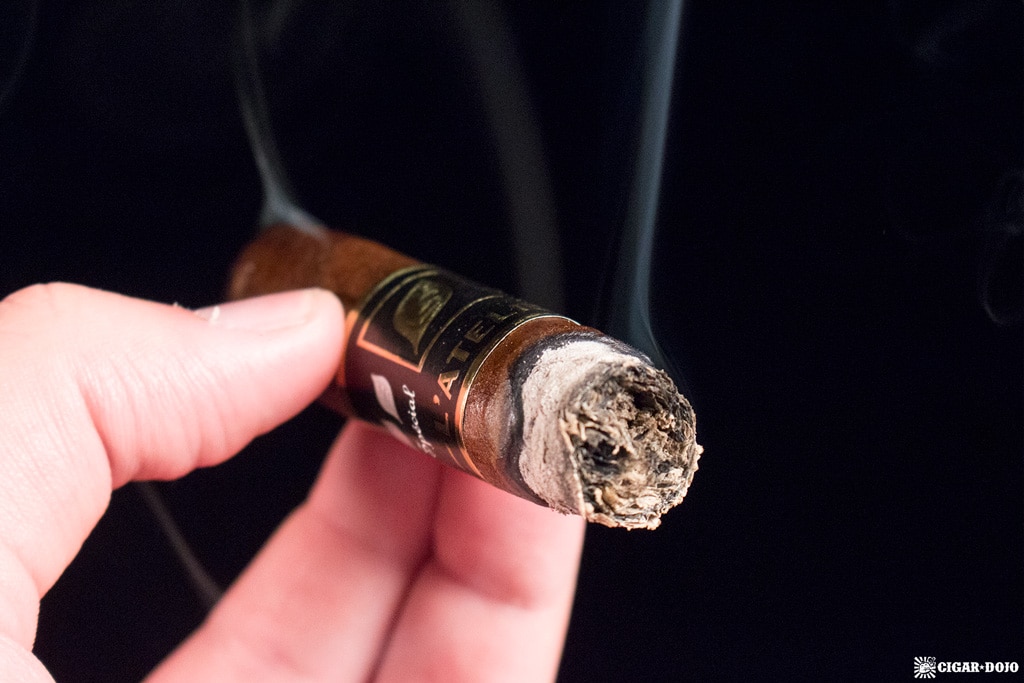 I would, although I’m not quite as eager to experience the full lineup as my original, high anticipation prior to the cigar’s launch. It’s been years since I’ve tried the L’Atelier Selection Spéciale, but if my memory serves me right, the Identité’s profile is most similar to this blend. Given the choice between the two, I’d take the Selection Spéciale, as I recall it being more flavor-forward than this blend. Identité is spot-on throughout the first half, offering enough complexity to warrant at least a five-pack purchase—try a couple from each size, if possible.

L'Atelier Identité Mélange Spécial No. 2
Sancti Spíritus translates to mean "Holy Spirit," and L'Atelier subsequently code-named their new Identité the "Holy Trinity," as the blend features Sancti Spíritus tobaccos in all three components: wrapper, binder, and filler. This amounts to a statistical all-star blend on paper, but the final outcome may need more time to reach its full potential. The cigar begins with a head-spinning rush of black pepper and wasabi zing through the nostrils; accompanied by a bright and complex pinnacle at the end of the first-third. But the remaining portions of the cigar seemed to fall at a slow and steady decline. E.g., When taking notes, you may find your pen resting, shy of touching paper for lapses of thirty minutes or more. This, combined with a finicky burn and touchups/relights at every inch or so, makes for a much lower score than initially expected.
Appearance95%
Burn/Construction80%
Draw85%
Flavor91%
Complexity94%
Price/Value92%
Pros
Cons
2017-05-31
90%Jump the Gun