For years, U.S. American cigar smokers have been longing for the day that Cuba and the United States re-cultivate their relationship. Although not quite there yet, connoisseurs around the world have been celebrating the small steps we’ve accomplished to satisfy our culturally tasteful desires. Even though we have what seems like years left to wait, many companies have already started to commemorate their releases to the movement.

One such company is Flor de Gonzalez (FDG), run by founder Arnaldo Gonzalez. Gonzalez grew up in Cuba, where he learned the art of growing and blending fine tobacco from his father and grandfather (both tobacco growers in the Santa Clara province). It wasn’t until 1997 that FDG’s cigar operation really took off, opening their main factory in Nicaragua.

Over the last 20 years, the company has released several cigar lines under the 90 Miles name, commemorating the 90 mile distance between the U.S. and Cuba. The 90 Miles cigar line has received numerous accolades over the years, including an appropriate 90 rating by Cigar Dojo’s very own Master Sensei on the 90 Miles Nicaragua RA, as well as a 91 rating on their 20 Aniversario Maduro.

This year, 2016, FDG releases yet another line into the long distance relationship, the 90 Millas (Noventa Millas in Spanish, translating 90 miles). Unlike past releases, the 90 Millas brings a wide range of options right out of the gate: a Connecticut shade offering (90 Millas Connecticut), Habano maduro (90 Millas Maduro), and the Unidos barber pole—all in various vitolas. 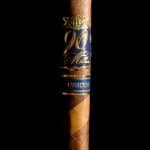 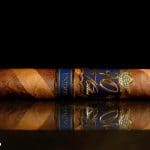 90 Millas Unidos is actually quite the clever concept, bringing the brand’s established connection with the US and Cuba and inserting their own commentary on the recent efforts to normalize relations between the two countries. With a classic barber pole-style wrapper, FDG showcases America’s most famed wrapper varietal, shade-grown Connecticut; the complimentary wrapper uses Habano seed, popularized by Cuba.

In the spirit of transparency, I am not one to lean towards a barber pole-styled cigar. In fact, I have never actually purchased one… I have only smoked those gifted to me. I find the idea to be gimmicky, unflattering, and more often than not, far below par. That can be said for flavor as well as appearance for me. When I smoke a cigar, I want to roll the tobacco between my fingers, examining every crack and crevice, and for some reason the idea of a duel wrapper throws off that entire part of my ritual.

All that being said, the 90 Millas is a good looking cigar for what it is. The tobacco looks intricately rolled with precision, with obvious seams and veins—although not distasteful—held together by a nice looking double cap. The bunch feels soft and pliable, looking like a loose roll from the foot’s point of view.

The aroma off the wrap and foot is a bit light, with just a musty barn mist settling in the air. After cutting and lighting, the Millas starts off a bit mild, as I expected, but with an unexpectedly tight draw. The first flame seemed to envelope an equal amount of Habano and Connecticut shade, so I am a bit weary this will make up the entire experience. The initial flavors are definitely on the “Connie” side, with a mild cedar, pepper, and light coffee and cream.

About twenty minutes in, approaching the meat of the first third, the 90 Millas blew up in flavor out of nowhere. A medium-plus amount of pepper and sweet cream overtake the palate, with a solid, medium body. There is also a nice spice through the retro-hale and on the finish. After massaging the draw through the first third, it still remains a bit tight, although a little more manageable, with a better amount of smoke output.

Burning towards the halfway point, the draw finally opens up to a comfortable resistance. The body stays a satisfying medium with a gentle strength building up as well. On the flavor front, things turn toward my favor, developing a mostly Habano-like palate of cedar, pepper, cream (both in flavor and texture) and that oh-so-delicious leather that so many Habano lovers crave.

Finishing things off, another surprising twist takes place in the strength factor, accumulating to a rather full intensity that neither Habano nor Connecticut’s are known for. Its strength isn’t overwhelming, however, melding well with the overall profile and body of the Millas. The last-noting flavors take a maduro turn, with a darker roasted coffee, a dry smoked cedar, and a sweeter cream ending things out.

Surprisingly, yes! Although I would much prefer a cigar that sticks to one thing and does it well, the 90 Millas succeeds in more ways than one with its ambition, and that is good enough for me.

90 Millas Unidos
Flor de Gonzalez has been rolling out a slow burn of successful releases (no pun intended) for the industry for over 20 years, and this year is no exception. Arnaldo Gonzalez took a bit of a risk (IMO) with the 90 Millas this year, with the release of a barber pole. Although there are exceptions to the rule, generally, styles such as these find a smaller amount of success after being labeled "gimmicky" by some of the craft cigar audience. I’m happy to say the 90 Millas is another exception. Although I am not a fan of barber pole cigars, the Millas has changed my point of view on them, as it offered a complex smoke with decent progression and body, for a reasonable price. I have yet to try the other 90 Millas’, but if this is any indication, I am sure they're worth a try.
Appearance86%
Burn/Construction90%
Draw83%
Flavor88%
Complexity90%
Price/Value100%
Pros
Cons
2016-11-11
90%Going the Distance