At Cigar Dojo, our year-end Cigar of the Year list takes a unique approach, limiting the results to include only cigars that are regularly available (no limited editions, etc.) and in the $10 price range. This way, we feel we are able to offer a more realistic ranking of the cigars that are attainable by most every cigar enthusiast.

However, there are those occasions when something more exclusive is necessary. We’d like to recognize these cigars as well, for this reason we have included a few extra awards, which we refer to as the “Exceptional Cigar Awards”, offering credit to some of our favorite cigars that didn’t fit the criteria for our Top 10 Cigars of the Year list.

NOTE: our criteria for the Exceptional Cigar Awards remove many of the restrictions of our traditional list. While each individual category contains its own unique guidelines, the only criteria that we hold all categories to is this: Cigars must have been released in 2015.

Best “Under the Radar” Cigar

These cigars are often from new brands, or maybe those that have a smaller distribution, or even cigars that are not yet available in the US. The idea here is to make yourself acquainted with new and exciting cigars that may not have otherwise caught your attention. Each of these smokes are more than worthy of a spot in your humidor, if given the chance. 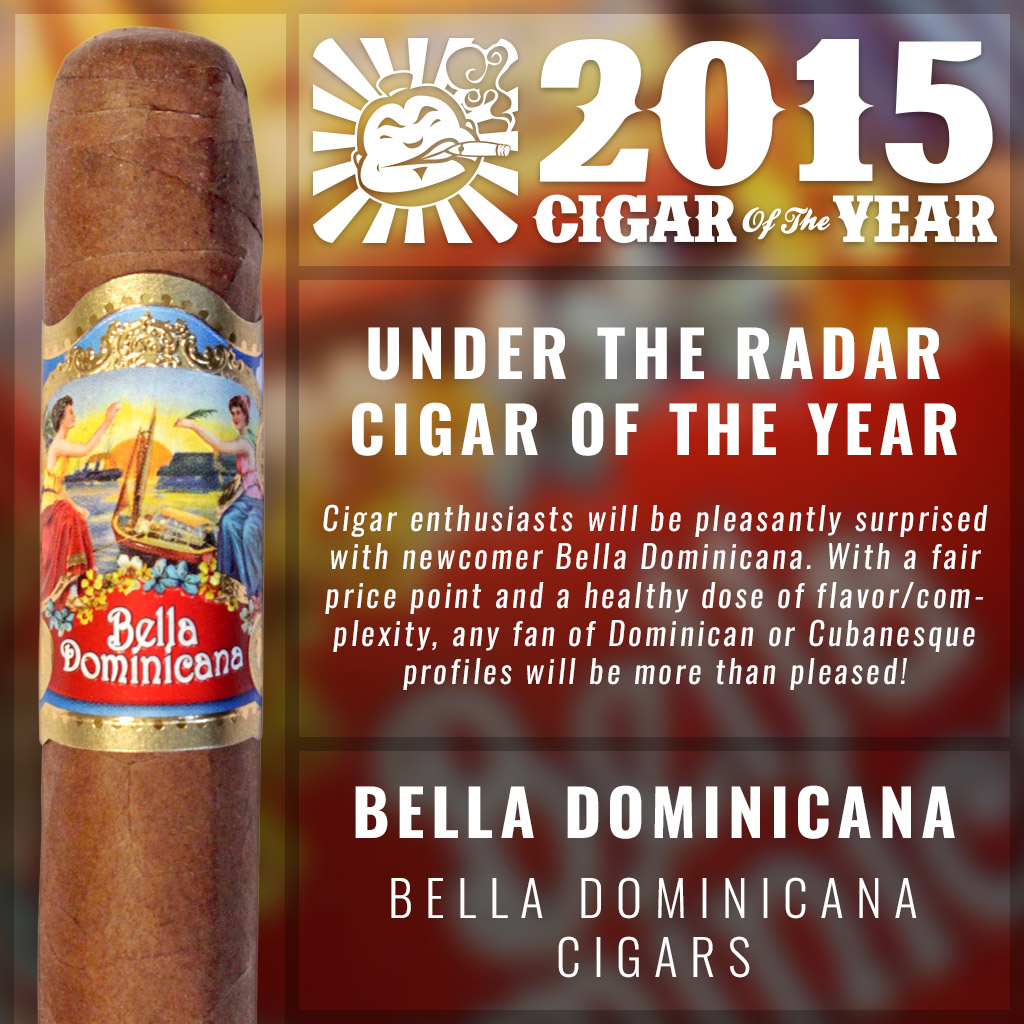 While the name may be new to many, you’ll most likely recognize the names behind it. Bella Dominicana is rolled at the Tabacalera Palma factory in the Dominican Republic and was blended by Palma’s owner Jochy Blanco as well as Ernesto Perez-Carrillo! It then comes as no surprise that the cigars are lush with classic flavors of cedar, hay, salted butter, and Graham cracker crust. Prepare your humidors for Bella’s imminent launch in the US—we think you’ll be smoking them on the regular.

Limited Edition Cigar of the Year

Because of their limited quantities produced, manufacturers are often able to incorporate rare tobaccos with remarkable results. Therefore, these cigars are often some of the best-performing smokes you’ll find. However, they can also be quite tricky to find; often times, they’ll be completely sold out by the time we release our year-end list—this is why we’ve given LEs their own category. 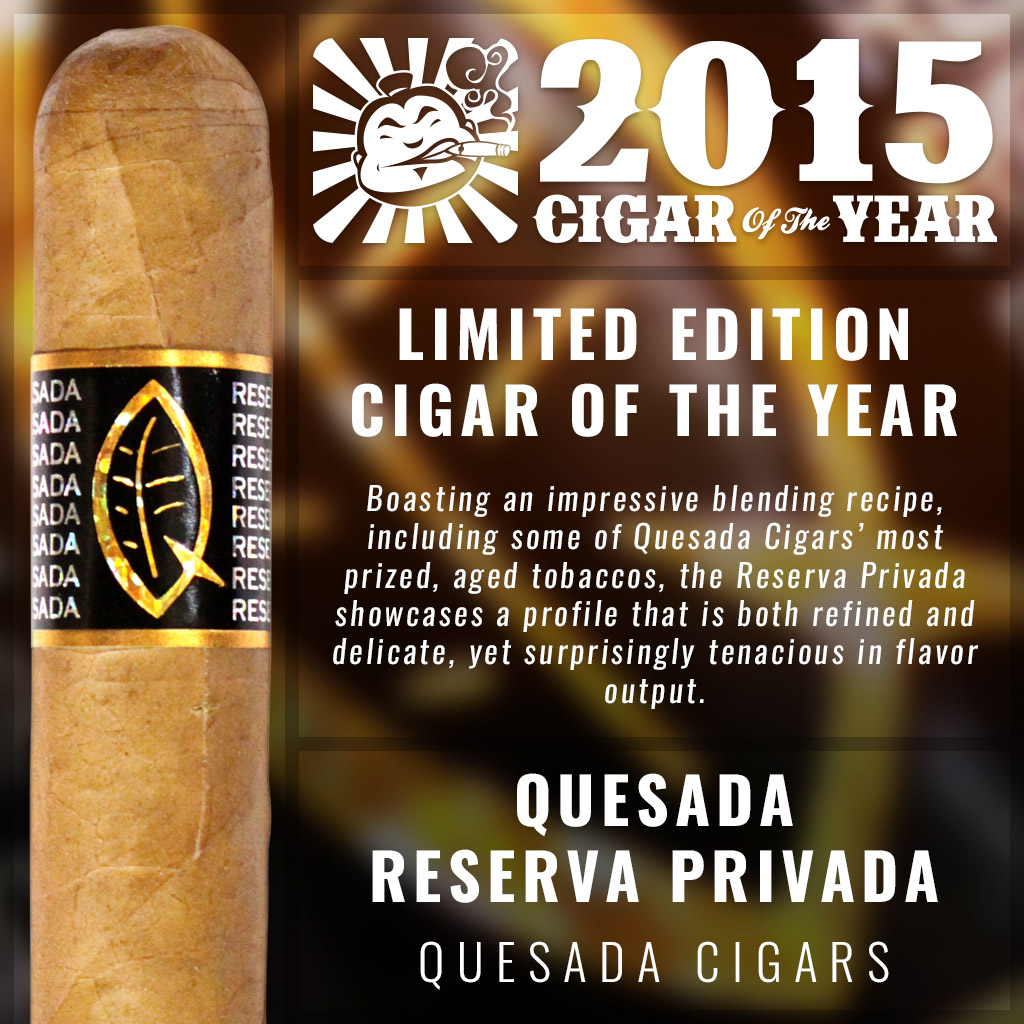 Quesada Reserva Privada is the unique culmination of time, luck, and skill. The cigar’s story dates back to 1997, when the Quesada family happened upon a perfect crop of tobacco. Master Blender Manuel Quesada wisely stored the tobaccos, using time-honored Cuban methods, aging for around 17 years! These rare tobaccos were then expertly blended, using a delicate Ecuadorian Connecticut wrapper in conjunction with a “high-octane” Pennsylvania Ligero and aged for an additional year, making for a brilliant contrast of flavors. Reserva Privada takes the philosophy of “the modern Connecticut” to a new level, feeling like the quintessence of the cigar’s genre—perfecting what many before have only attempted.

Luxury Cigar of the Year

A luxury cigar is special in that it often combines the exquisite quality of a limited edition cigar with the more broad availability of a regular production. Including only the best tobaccos, these cigars often carry an equally luxurious price point… And while you won’t see many cigar fans smoking these cigars on a regular basis, it’s always great to have such a cigar on hand for those special, celebratory occasions.

At Cigar Dojo, we cannot say enough good things about the Don Reynaldo. Indeed, it holds the honor of our highest rated cigar to date, at a whopping 96! We don’t give out this kind of score lightly, most cigars are lucky to receive a 93 or 94. But there was no denying the Don Reynaldo Regalos. The cigar is a small batch creation out of the revered El Titan de Bronze factory in Miami’s Little Havana neighborhood, employing only Category 9 rollers—the best in the world. Regalos is the second cigar under the Don Reynaldo name, featuring the same blend with an altered size—which, in our opinion, was even more impressive than the original from 2014. Here you will find a perfectly balanced profile, featuring a steady evolution throughout. Never does the cigar stray off track, dip, dive, or show an unwanted note. The flavors are refined and somewhat subdued, making you sit and ponder the complex nature of each puff. A truly remarkable smoking experience on par with Cuba’s top offerings.

Cigar Brand of the Year

This award is given to the brand that we feel had the biggest impact on the world of premium cigars in 2015. Whether they made big changes to their design, lineup, or simply grew their brand exponentially, this is a brand that was hard to miss in 2015. 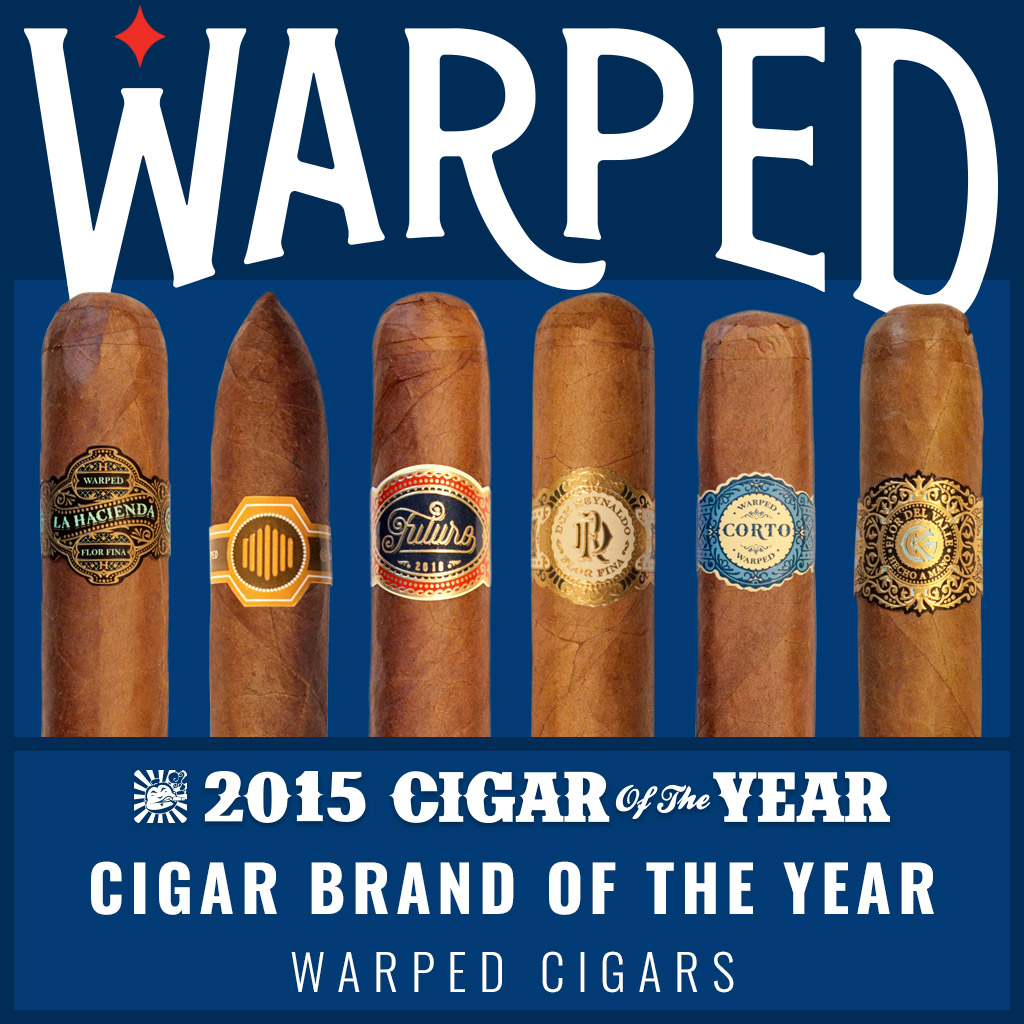 Created by entrepreneur and aficionado Kyle Gellis, Warped Cigars saw its humble beginnings in 2009, creating boutique cigars out of Miami. The company then switched gears, focussing on accessories while Gellis finished his degree at UCF. The brand then returned to the premium cigar scene in 2014, and has been moving forward at an alarming rate ever since.

Their lineup features a solid selection of core-line cigars, focusing on Cuban traditions with a modern twist. Many of Warped’s cigars revive retired Cuban lines and feature classic, yet refreshing profiles. This is due in large part to their usage of skilled, Category 9 rollers from two of the best cigar factories in the world, both in the United States and Nicaragua. Warped takes the somewhat unusual strategy (in today’s market) of focusing almost exclusively on core-line cigars. Nearly every cigar under the Warped name is regularly produced—even the Don Reynaldo, which was initially a limited edition blend, is now regularly produced in small batches out of El Titan de Bronze. When Warped does introduce a limited run cigar, it is usually only a wrapper change or other slight tweaking of a regular production blend—such as the La Colmena Black Honey, using the El Oso’s Habano Ecuador Oscuro wrapper over the La Colmena blend.

Other notable releases in 2015 included the La Hacienda, Futuro, Corto, and a new take on their popular Flor del Valle blend—Flor del Valle Sky Flower. While our favorite of the bunch was clearly Don Reynaldo, we’d be happy to smoke any one of these cigars at a moments notice!

Warped has quickly caught hold of enthusiasts and boutique fanatics across the country. It’s usually a telling sign when your brand takes a day of the week, such as the infamous #fuenteFriday or #tatTuesday – keep an eye out for #warpedWednesday, it may just be your new favorite day of the week.