It’s no news to any hard-core cigar enthusiast out there, our industry is under constant attack. Every day our government seems to take more rights away from us—little-by-little—slowly reaching further into our lives, taking away from our most fondly loved hobby. But without activists standing up for our rights, where would we be? One such activist, a very influential one at that, Rocky Patel—has created a special cigar just for this fight: Prohibition. As its name suggests, Prohibition was created to send a message to the people attacking our industry—all the while making a fine cigar that any activist would gladly smoke while holding up signs in the city streets.

The Prohibition was released in two skews: the Mexican, featuring a San Andrés maduro wrapper; and the Broadleaf, boasting a Connecticut broadleaf maduro wrapper. Both are packaged in rustic-looking mason jars (true to the prohibition era) and shipped in old fashioned liquor crates. The sheer presentation with these cigars stands high among the crowded shops of thousands of cigar brands fighting for shelf space—truly something not to be missed.

I will be reviewing both Prohibitions back-to-back, so feel free to jump around and compare my thoughts!

Next up, the Mexican… 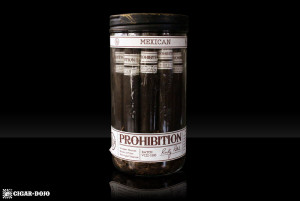 Looking at the Prohibition Mexican, a rustic, dark, tan wrapper showcases a very fine cigar. The white and brown simplistic bands complement each other well—as well as contrast with its sister, the Broadleaf. A few noticeable veins here and there, and a couple minor blemishes surround the body, all held together with a very nice cap.

Once cut up and well toasted, I take my first puff. A beautiful draw meets my mouth, unveiling a nice and easy mild body of flavors. Herbal notes, red bell peppers, and a touch of spice begin pouring into my mouth with every puff. Now this isn’t a pepper bomb; it’s very subtle and even slightly sweet—a good mild-medium at the most.

Letting my Mexican heat up a bit, a very nice transition has taken place. A brand new bouquet of flavor has taken over: crème, wood, black pepper, and hints of leather. It isn’t a blast of flavors, however. Even on the retro-hale, the smoke remains calm and mellow—far less demanding than the Broadleaf. 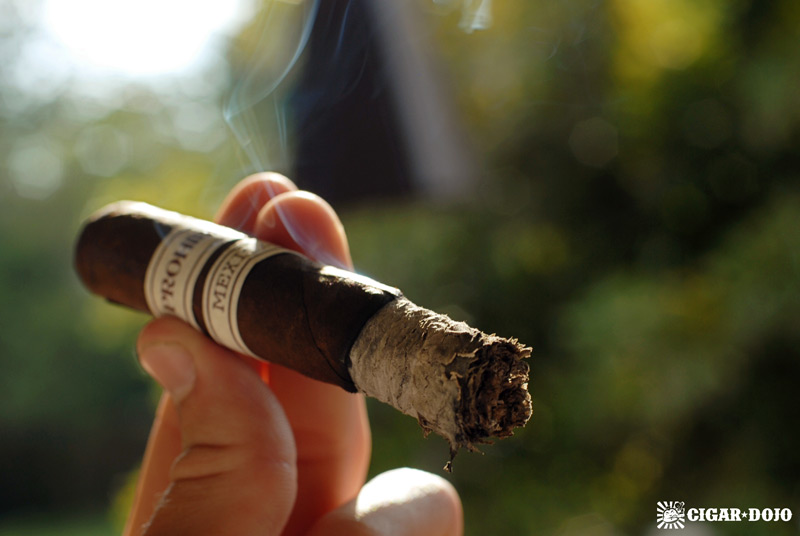 As I close in on the halfway mark, I’ve already logged-in two touchups. Despite the extremely uneven burn, the draw is simply amazing. It’s not just a super loose draw—I don’t always favor those. It requires just a touch of resistance, making you think you’re fighting for something, and when you put in enough effort, you’re greatly rewarded with rich, abundant smoke.

Beverage Pairing
Natural Brew Draft Root Beer—a small batch root beer brewed up of: sweet birch, licorice root, sarsaparilla, and pure vanilla. With my Mexican, I decided to pair it with something a little heavier than the Broadleaf. At this point, my cigar is a mellow, medium-bodied smoke, and I thought a nice extra boost of flavors would serve nicely. Boy was I right! As I take a sip of the Draft Root Beer, its unmistakably smooth crème overwhelms my palate again (similar to the crème soda from the Broadleaf review) and then leads into a deeper anise and rich root flavor. Pairing with my Prohibition Mexican, it brings out not only more of the woody and leather notes I was already getting—but also adds a very sweet anise/cocoa and spice infusion.

This pairing serves very well, and does not take control of the palate, unlike the crème soda.

As I finish out the Prohibition Mexican, a fuller body comes on towards the end of the cigar. The leather takes control of the bouquet, and hints of vanilla and birch wood dance around it in smooth, yet rich, bursts of flavor. The last twenty minutes of the cigar is where it really amps up, I only wish it would have started developing a fuller body sooner.

Would I smoke this again?

Absolutely. Although the extremely mild start doesn’t always appeal to everyone, it does make the Mexican accessible to almost everyone—and at any time of day. I definitely recommend a 5-pack to start.

Prohibition Comparison
Despite creating two maduro cigars in the same series, there are clear distinctions in profile with these cigars. Here you have a Broadleaf that seems to play it safe, offering balance and spice as its distinguishing features—which is flavorful, but lacks interest at times. And on the other side you have a San Andrés maduro that takes risks—going off the rails at times, though never losing my attention—when it hits just right, it pays off big time.

Rocky Patel Prohibition - San Andreas Maduro
At the start, the Prohibition Mexican leads you on to think it’s just another mild stick. Towards the halfway point, you start to believe it, as the flavors only just slightly ramp up. But at the end, the Mexican lets loose an array of flavor bombs that demand your attention. Mild pepper and herbs, silky smooth leather, and vanilla, anise, and cocoa round out this cigar with an excellent flavor wheel.
Appearance94%
Burn/Construction80%
Draw95%
Flavor91%
Complexity82%
Price/Value94%
Pros
Cons
2015-10-07
89%Unpredictably Intriguing