It’s no secret that AJ Fernandez has been gaining some serious ground over the past few years, and this was more apparent than ever at this year’s IPCPR show. The biggest names in the industry all want a piece of the “AJ magic,” with industry giants Altadis USA and General Cigar Company both featuring AJ tobaccos as a means to revamp classic brands such as Hoyo de Monterrey, Montecristo, and H. Upmann at this year’s show. There are many others as well, such as Espinosa Premium Cigars recently moving some of their brands to AJ’s new San Lotano factory in Ocotál, Nicaragua; and then there are further companies sharing involvement, but have chosen to remain anonymous…

There are many facets to AJ’s success, with a complete vertical integration being a key component. In fact, all of the accolades we’ve mentioned thus far have concerned other aspects of the Fernandez operations, such as his multiple factories, tobacco farms, and AJ’s renowned talents as a Master Blender. But the AJ Fernandez brand (AJ Fernandez Cigar Company) is performing equally as well as the many ingredients behind its name.

Last year’s showing revealed the hugely successful Bellas Artes line (going on to receive an impressive 94 points from Cigar Dojo and claiming our #4 Cigar of the Year for 2016), but 2017 was all about refining the current offering. New designs and new additions to existing lineups were the focus, all displayed within the same large booth from 2016, which roughly resembles AJ’s famous compound in Estelí, Nicaragua.

The Enclave brand was introduced at IPCPR 2015, using a Native American theme and continuing the motivation from the brand’s popular New World cigar, where AJ partnered with his father Ismael to create the blend.

Now, AJ Fernandez showcases the followup maduro counterpart, Enclave Broadleaf. The cigar is named for its use of a Connecticut Broadleaf wrapper, which is surprisingly a “first” for the AJ Fernandez Cigar Co. brand. The dark wrapper is blended with Nicaraguan tobaccos of Pueblo Nuevo, Estelí, and Jalapa—making for a medium-full-bodied profile that comes in at a slightly higher price point ($8.50 – $9.50) than AJ’s usual, bargain-priced offerings (for comparison, the original Enclave is priced in the $7 range).

Enclave Broadleaf began shipping the week of IPCPR, arriving in boxes of 20 cigars. While listed as having 3 sizes at the show, AJ Fernandez lists a 4th, Gordo size on their website—most likely a forthcoming vitola. 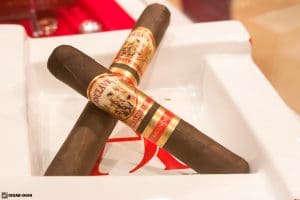 AJ Fernandez debuted New World at IPCPR 2014 and was quick to gain attention as one of the best value-buys on the market ($5 – $6 range). This was the first marketed pairing of AJ and his father Ismael working together for the final blend and has since been followed by the New World Connecticut in 2015.

Since then, New World has become AJF Cigar Co.’s best-selling brand. As such, the cigars have been given the royal treatment, with AJ crafting a special puro blend for the third installment in this series. For Puro Especial, not only is the blend a puro (tobaccos coming from a single country), but an “AJ puro”—showcasing only tobaccos from AJ’s famed tobacco farms across Nicaragua. And while all tobaccos in the blend are aged 3 to 5 years, only the wrapper’s specifics have been revealed—being Criollo ’98 from AJ’s San José farm in Estelí. Other AJ farms listed include his San Diego farm (used for its mineral quality), La Soledad farm (incredible flavors), and the La Providencia farm (chosen for its aroma); although it isn’t mentioned what role these farms play in the final blend.

New World Puro Especial was previously released in small quantities to meet last year’s FDA deadline. As with the Enclave Broadleaf, 3 sizes were displayed at the show, with a 4th “Gordo” size reportedly forthcoming. 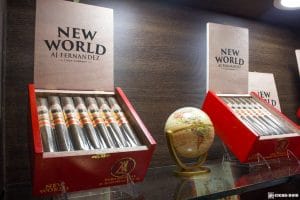 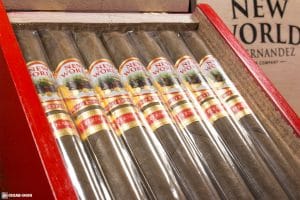 Sano Lotano is the brand that put AJ Fernandez Cigar Co. on the map. The line was introduced in 2010 as a revamped brand from the Fernandez family’s heritage—originally made by AJ’s grandfather Andres Fernandez in the family’s hometown of San Luis, Cuba.

For 2017, the San Lotano cigars have been updated, bringing the line up to par with AJ’s more recent releases. The new packaging pays homage to the Fernandez family’s Cuban home, which is displayed on the new band artwork. Also, as we saw with many other brands at IPCPR 2017, the packaging has been designed to be adaptable to future FDA packaging restrictions, which are said to require a minimum of 30% coverage of the display areas of a cigar box. For San Lotano, the logos have been placed directly in the center of the displays, with room for future warning labels above or below. 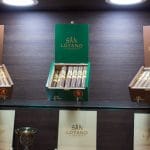 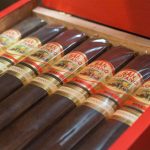