With so many new lines of cigars coming out, sometimes it’s better to take a classic brand and give it a modern update. General Cigar, with Justin Andrews and the newly acquired Matt Booth, revitalized the non-Cuban Sancho Panza cigar line, updating both packaging and the cigar itself earlier this year.

The Sancho Panza cigar originated back in 1848 by Don Emilio Ohmstead in Cuba. In 1981, following the Castro revolution, the non-Cuban Sancho Panza was registered in the US by Villazon & Co. Later, it was acquired by General Cigar Co., becoming one of the longest-running lines in their portfolio.

Matt Wilson, senior brand manager of Sancho Panza said, “Sancho Panza has always been a dependable, tried and true smoke, where the first puff is the same as the last. Cigar culture has evolved and so has the desire for dimensional smoking experiences that deliver a multitude of experiences in one cigar. With this in mind, we tapped the creative juggernaut known as Matt Booth to collaborate on the Sancho blends, and the look and feel of the brand. With Sancho, it is as important to us to respect the traditionalist as it is to embrace the modern smoker, and we feel we’ve ticked the boxes for both.”

Sancho Panza is named for the squire to Don Quixote in the novel written by Miguel de Cervantes. In the story, Don Quixote and Sancho Panza set out to prove chivalry is not dead, as they aspire to be heroes. Taking that plot line, you can see the coming together of Justin Andrews and Matt Booth, proving the old cigar brands are not dead and can be elevated once more.

Sancho Panza is built on three distinct blends: The Original, Double Maduro, and Extra Fuerte, each rolled in three sizes. They are offered in 20-count wooden boxes, with prices ranging from $6.69 to $9.49 MSRP. The design for the new cigars has the creative touch of Matt Booth that reflects the latin culture of Los Angeles, CA.

Sancho Panza The Original’s wooden boxes are navy blue with gold-colored lettering. The name “SANCHO PANZA” in large print is central, with the two words stacked and tapered on each end. The cigar band has a similar color and design, with “HECHO A MANO” above “SANCHO” in white, and “HONDURAS” below “PANZA”. The secondary band is in the light gold color, with “THE ORIGINAL” in white.

The Sancho Panza The Original Robusto cigar has a light tea leaf hue, with the colors of the navy blue and gold bands really standing out. The feel of the cigar is dry, with no oil. There are some mild veins and seams noted. The aroma of the cigar is a strong cedar smell, and at the foot some cinnamon spice notes. 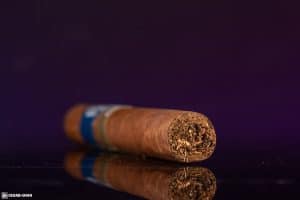 A straight cut was used on the Sancho Panza cigar, which has a solid, well-made cap. The cold draw did not produce any notable flavors (which was interesting), but I was able to move a decent amount of air through the unlit cigar. When lighting the Sancho Panza, low smoke output comes off the cigar. Initial puffs bring a strong, dry roasted peanut flavor, and a very dry mouthfeel is noted. Slight notes of apricot sweetness are present (almost jam-like). The retrohale has mild black pepper with a slight cinnamon flavor.

The main flavor that stays consistent from start to finish is the aforementioned dry roasted peanuts with an accompanying dry mouthfeel. The sweetness of apricot jam picks up more in the middle of the cigar, and the salty and sweet reminds me of apricot jam on a saltine cracker. Every so often in the middle and towards the end of the smoke, slight notes of must / wet concrete flavor come through. The retrohale in the middle picks up strong black pepper spice and cedar, but towards the end it is light black pepper and very light cedar flavor.

From start to finish, Sancho Panza is very consistent, with just subtle transitions and a stable smoke. The burn is even, with no touchups whatsoever. The smoke output is light/low, and the ash is a very flaky light gray that only stays on for a quarter to half an inch. At first, I thought the draw on the samples was a little loose, but the other samples were really right on point with a good resistance—right in the Goldilocks zone.

This is a hard question to answer. Overall, this is a good rebrand and redesign of a cigar that has consistent flavor at a great price point. For a budget-friendly cigar, there is just so much out there on the market, and time will tell if this rebrand will bring new customers. I am sure some people will put this cigar into regular rotation because of the price point and consistent flavors. I am unlikely to add this to my regular rotation, but believe it is worth a five-pack.

Sancho Panza The Original Robusto
General Cigar Company acquiring Matt Booth and collaborating with Justin Andrews to modernize the Sancho Panza brand I believe is a good start to this relationship. This classic brand being updated maintains the history of this cigar’s consistency, but brings the flavors that today’s cigar smokers are looking for. The Sancho Panza The Original has a dry mouthfeel with dry roasted peanuts and apricot jam sweetness. There is not much in transitions during the smoking experience, but dependable flavor through the duration is the driving point of this cigar.
Appearance87%
Burn/Construction87%
Draw88%
Flavor88%
Complexity85%
Price/Value89%
Pros
Cons
2022-11-04
87%Loyal Squire