The Altar Q comes to us by way of Oscar Valladares and his Oscar Valladares Tobacco & Co. factory in Danlí, Honduras. The cigar pays homage to the Mayan empire, drawing specifically from a 1,244 year-old artifact—Altar Q—from the former Mayan city of Copán. According to Wikipedia:

Altar Q records a dynastic lineage for the Copán-based society. It was created during the rule of King Yax Pac in 776. Each of the sixteen leaders of Copán are shown with a full body portrait: four on each side of the monument. It starts with Yax K’uk’ Mo’, who ruled starting in 426 AD, and extends through 763 AD, ending with Yax Pasaj Chan Yoaat. Therefore, the monument’s depictions span three hundred and fifty years of time.

The Altar Q cigar nails all the details of this monument. The box is a replica in miniature, down to the “feet” of the box. The box contains 16 numbered cigars that feature the likeness of one of the 16 individual rulers. To further impress, the cigars are loaded into four stacked cedar trays and rest upon curled leaves of tobacco. While I didn’t find any specific mention to verify, I believe the band and secondary art-wrap (I can’t bring myself to think of it as a sub-band) are made of the tobacco paper (made from the stems of tobacco) that was used on the Leaf by Oscar release. It certainly feels and behaves the same way. All in all, it’s impossible to not appreciate the inspiration for, and execution of, the packaging. It bears noting that the filler and binder tobaccos in this release are from the Copán region of Honduras, with the Valladares factory being based in Danlí (180 miles southeast of Copán). 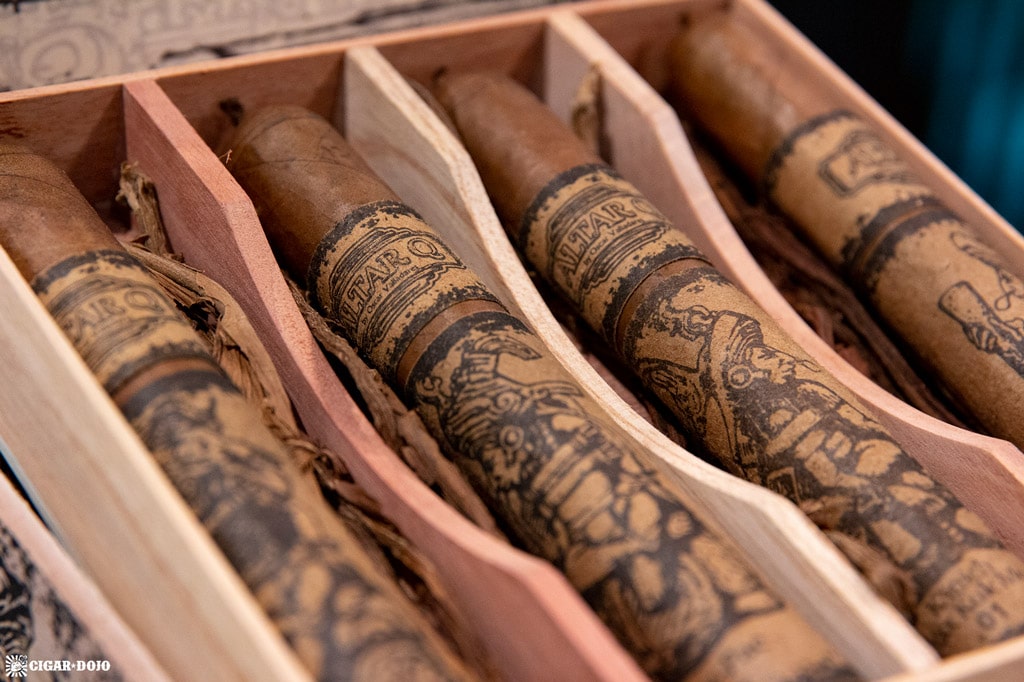 Despite the size of the cigar, it seems fairly light in the hand. The wrapper is shiny, shiny, shiny boots of leather and moderately veiny, although the veins themselves are very small and flat. The speckled wrapper is a peanut butter brown with but a suggestion of an olive-hued highlight that is more noticeable near the cap, as that portion of the wrapper is significantly lighter than the rest. The toro is topped with a cute little pigtail cap… which is probably not the correct term, as it’s straight and not curled. The label… I generally don’t care for extensive labels and secondary bands on cigars. While I appreciate when a cigar has some nice artwork, I do get tired of peeling off what essentially amounts to trash when I want to smoke my cigar. This cigar is four fifths covered, but I don’t mind a bit. Every cigar in the box features a different ruler, and is a great way to familiarize oneself with a bit of history. My only gripe with this is that the art-wrap is impossible to remove intact, which is a shame, as I’d love to save them. As you’d expect, it’s very easy to damage the wrapper during removal. 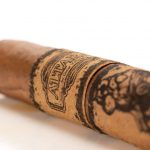 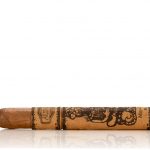 This thing has a musky aroma from the wrapper: funky, meaty, sweet and yeasty. There are pretty straightforward tobacco notes from the foot, with something akin to Worcestershire sauce but sweeter. The cold draw is surprising, with a light strawberries-n-cream candy note on top some fresh mild jalapeño—more juicy than spicy.

The initial draw is really, really wide open with a punch cut. I had kind of expected that from the lightness in the hand. Smoke production starts out just fine, though (I do expect to get a lap-full of ash, however). The flavors start as a hazelnut sweetness with a heap of creaminess. There’s a hint of a spicy tingle in the retrohale that doesn’t quite match what is coming across the palate. Flavors quickly transition into bittersweet chocolate, with the spicy feeling now coming into the mouth that, much like the retrohale experience, doesn’t quite match the flavors at this point. Another swift change—the flavors now expressing some tasty coffee and a nice, funky, Sumatran sweetness. The most consistent thing across this quickly evolving cigar (now I’m getting some of the aforementioned Worcestershire sauce, rich and salty) is a creamy sensation that is felt as much as tasted. You can just tack creamy onto every other flavor you come across with this: creamy coffee, creamy nuts, blah blah blah.

Unfortunately for this blend, after about 20 minutes there is an unpleasant metallic flavor that creeps in; sort of like putting your tongue on a nine-volt battery. My first experience with this cigar was much of the same—metallic and earthy—and I had hoped that perhaps the cigar was delivered a touch too damp. But just as I was about to bemoan this cigar as succumbing to the same fate, the flavor shifts into a more pleasant, bright citrus. It’s as if everything was a confusing blur, but the focus has adjusted to bring everything together into a clear image. The sensation being that, for a moment, I experienced something that I thought was undesirable; but with an almost tactile feel, it has clicked into place, which is impressive. It’s as if the cigar wanted to show what it was made of before presenting the finished product, thus allowing me to more fully appreciate the nuance and interplay of flavors. As The Dude would say, “That’s fucking interesting, man. That’s fucking interesting.” 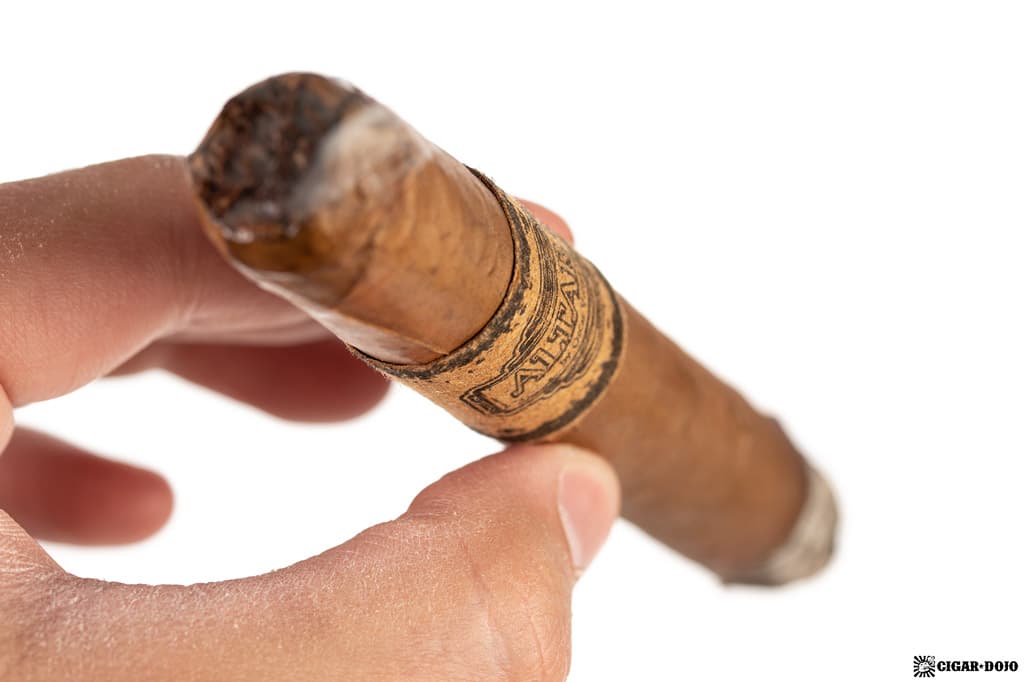 There’s now a salty wood flavor that makes me think of old boats on the sea. Have I ever licked an ocean-faring craft before to make this comparison? No. Does it enter my mind anyway? Yes. I tap off an impressively neat inch-and-a-half of ash, fearing for my lap. I feel I could go on and on listing the flavors that this thing presents. It really is all over the place. Maybe it’s just me, giddy with the excitement of sitting outside in a t-shirt and flip-flops at night for the first time since last September. I think I’m having sensory overload from this cigar. Or maybe it’s the isolation. Perhaps I need to see more real people that aren’t on Zoom. If I had to pull out something that I could point to as an overarching, cohesive description of the cigar at this point, it’s creamy citrus. But there’s really a lot more to it than that. This brings the first third to a close at 47 minutes of smoke time. I can’t believe that this lightweight, open-draw cigar is smoking so slow! I’m impressed. Flavor is medium-plus, strength is middling, body is a little shy of reaching medium.

The second third kicks off with Tangerine. That’s the citrus that is coming across. There’s not much in the way of pepper or spice happening at this point. It’s really all about how that metallic twang morphs into the tangerine, followed by cream, some light hay, brown sugar, astringent Darjeeling tea… and then out of nowhere: fatty burnt ends of brisket. “The Chinaman is not the issue here, Dude!” I’m just going to focus on the big picture here for a while: twangy tangerine cream. Anyone ever wonder why, at the beginning of Rick and Morty, it says “This program is intended for mature audiences?” Ironic. Another 36 minutes to finish the second third and, overall, there is little change in strength or flavor intensity, but the body has picked up a little.

Into the final third and there is finally a cohesion to the blend. No more is it a runaway flavor train. For better or worse, it’s kind of the same metallic tangerine in the forefront—just barely on the pleasant side of the teeter totter. Meanwhile, the nine-volt battery is on the other side, with a little less creaminess and some astringency that could be woody or tannic grape skins. By the end of the two-hour, 15-minute smoke time (I nubbed it), the biggest change was for the better, as the metallic undertone shifted towards big cedar. The strength, flavor, and body were all within the region of medium. Construction impressed, although a couple touchups were needed towards the end. 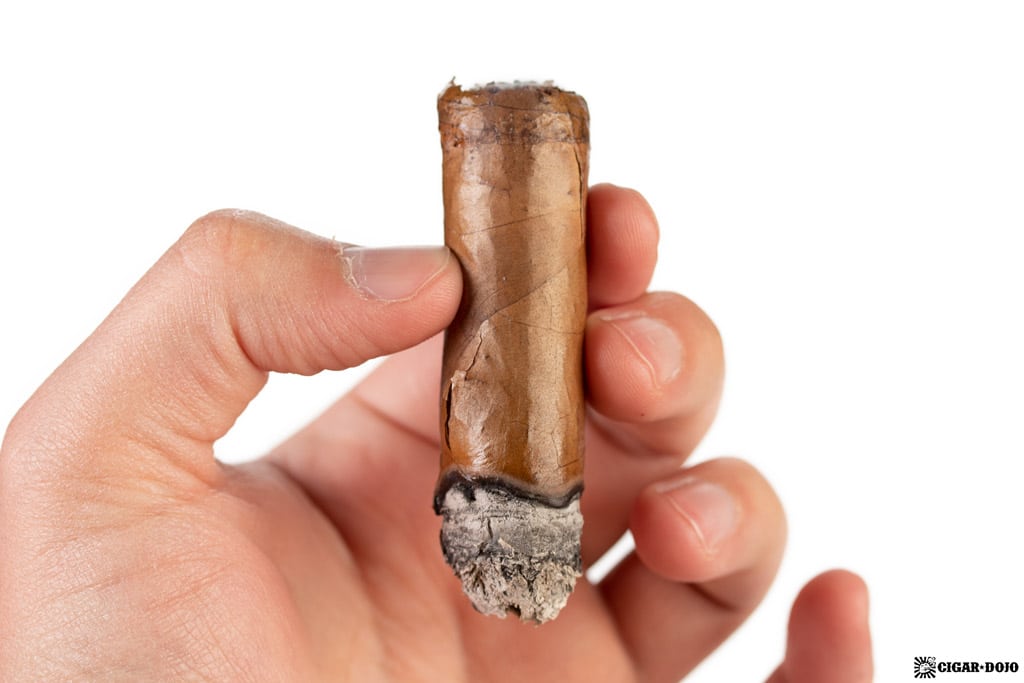 I wonder: what would this cigar have been if I had given it six months of humidor time? It was initially so all over the place that, while mostly enjoyable, it didn’t quite seem cohesive. The cigar reminds me of my five-year-old son, walking circles around me, talking talking talking. It’s hard to keep up. While it did form a more complete picture towards the midpoint, its best moments were in the final inch, where the cedar notes replaced the metallic twang. While I missed the cavalcade of flavors from the first third, the simpler final profile was thoroughly enjoyable. I would certainly enjoy this cigar again, although I’m not sure what I’d like most: the wild ride in the first third, or the steady, enjoyable last act. 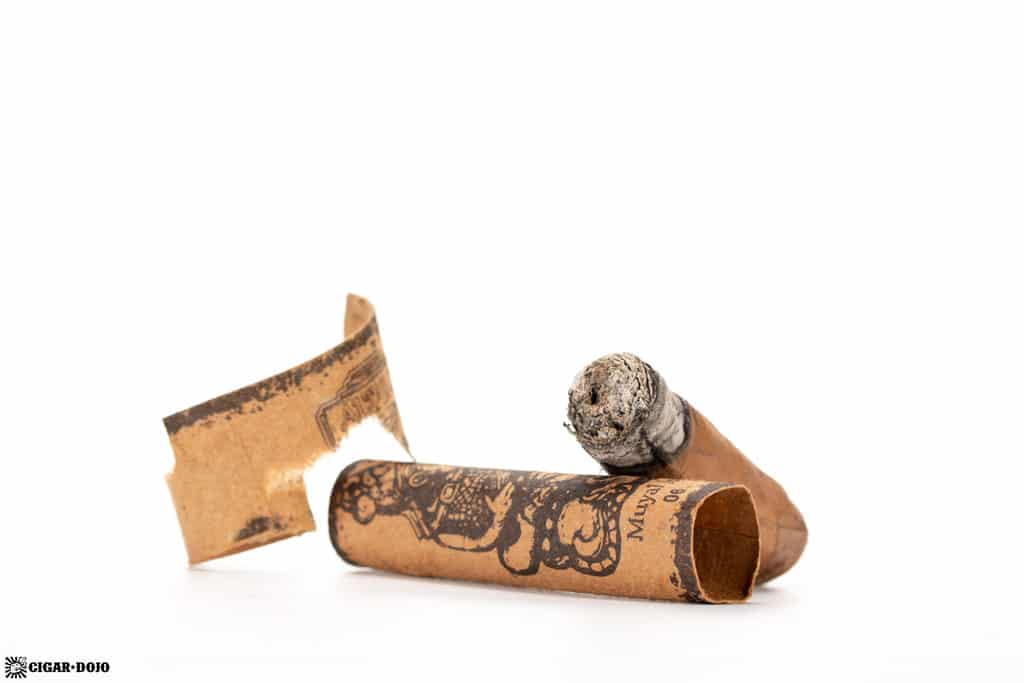 Altar Q by Oscar Valladares
This was certainly an interesting cigar. It demanded attention initially, settled into a complex middle, with a very enjoyable finale. And I have to say that, while I was concerned about what I thought was going to be an under-filled cigar, the construction and burn were near flawless. I’m willing to chalk up the uninspired first sample I smoked to simply not having enough time to acclimate to my desired RH, as the flavors that I initially didn’t care for were able to give structure and complexity to the core after a few more weeks' rest. And while there were moments or flavors that, taken without context, were not something I typically enjoy in a cigar, they took what would’ve otherwise been a significantly less-interesting experience and elevated it to something unique and worth the wait.
Appearance93%
Burn/Construction90%
Draw85%
Flavor85%
Complexity92%
Price/Value85%
Pros
Cons
2020-05-29
88%Mayan I Have Another?