Two weeks after IPCPR 2016, Espinosa Premium Cigars unveiled an assortment of new projects under under the company’s Backroom Series—an exclusive collection of cigars that are intended to be sold only at Espinosa-branded lounges across the country. Announced only three days prior to the FDA deadline of August 8th, many saw the announcement as a means to establish new brands for future releases (not necessarily holding true to the initial look, blend, or series). One such example is the Espinosa Reggae, a cigar that was among the eight Backroom Series cigars announced, but later materialized in 2017 as a core-line project.

Although each of the cigars were soft-launched in 2016 as to meet deadlines, only three cigars have seen official releases into the market: Eminent Domain (released in the spring of 2017 as the second cigar in Espinosa’s Backroom Series), Reggae (launched at IPCPR 2017), and Wasabi (released in April 2018). When soft-launched in 2016, Wasabi became one of the most popular cigars of Espinosa’s eight “Backroom” blends. This lead to a larger release earlier this year, with the company shipping a limited run of 5,000 cigars. Unlike last year’s Eminent Domain project, Wasabi was offered to all of Espinosa’s accounts across the country.

Little is known of the Wasabi blend, other than the fact that it is wrapped in a two-tone Candela and Habano exterior. This allows for a more traditional taste on the tongue, while delivering the unique characteristics of the candela wrapper in the smoking profile. When originally announced in 2016, Espinosa described the blend as simply, “a spicy candela.” The company has remained tight-lipped ever since, touting the blend for its amped-up qualities not conventionally found in candela-wrapped cigars.

Wasabi certainly isn’t going to win any design awards, packaged in simplistic boxes with a neon green and white color scheme. The font is a generic “Asian” theme, one that is quickly found with a simple Google search. And the bands are more of the same, offering the “WASABI” text in green on a white background; it’s not the easiest on the eyes.

The cigars themselves look quite interesting, using a candela leaf with an unusually dark and mottled appearance. Candela wrappers are often in the vein of Connecticut Shade, being bright and void of discoloration and other imperfections. This leaf looks more like a candela rendition of a gnarly broadleaf, showing visible seams and loads of bumps, twists, and substantial veins. The Habano cap is a nice touch, offering a good contrast and a uniqueness to the cigar. The box-press is subtle, giving a rectangular shape to the robusto when looking straight down the cigar’s foot. Noticeably, the cigar is lightly bunched, showing little resistance when squeezed.

On the nose, I found light aromas of generic grass and unripe banana. There are cedar, white pepper, and lemon aromas on the cigar’s foot. With a double guillotine cut, there is an easy pre-light draw, giving light and airy notes of paper and sweet cashews. 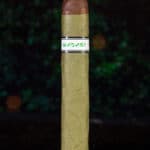 As advertised, spicy flavors are delivered upon lighting. The notes are of raw peppercorn and burning brush and are more apparent as sensations across the tongue, rather than a burning spice through the nostrils. But the spices are quick to migrate, becoming the zesty sensation aforementioned within the cigar’s first half-inch. There are dark spices (black pepper and cumin), joined by vegetation (grass and hay) and a subtle, tangy sweetness that enters the profile around the one-inch mark. The Habano cap is an appreciated touch that adds a bit of peanut saltiness on the tongue—one of the cigar’s most enjoyable attributes throughout the first third. 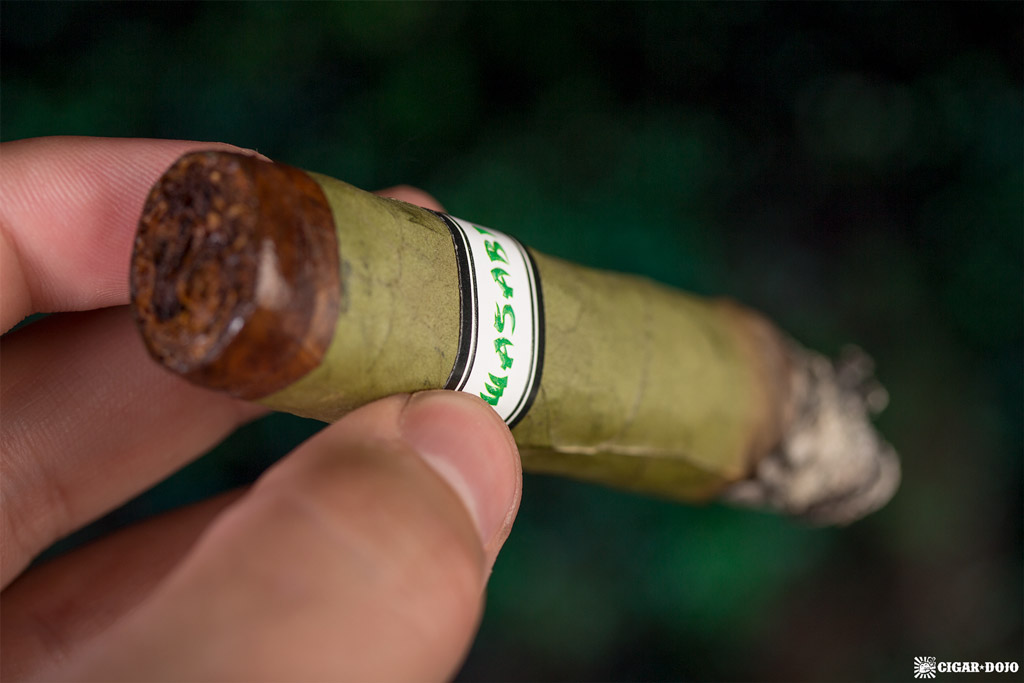 Wasabi is essentially medium in its strength, body, and flavor—perhaps a touch under medium in the flavor department. The smoke carries a dry texture, only barely registering on the front of the tongue (sweetness), primarily activating the middle (bitterness) and a little on the sides (saltiness). Despite the cigar’s extremely easy pre-light draw, the smoking draw is on the firm side (a 7 or 8 out of 10, with 5 being dead medium). Luckily, this doesn’t have much of an effect on the smoke output, which is about medium.

In the middle portion of the robusto there are aspects that hint at the cigar’s name, burning through the nostrils with a wasabi/mustard-like zing. The strength increases and Wasabi tops out around medium/full strength, medium flavor, and a body somewhere in between. In the final third, a touch-up was required, igniting rich cabinet spices of cardamom, allspice, and clove. As these flavors dwindle, the cigar signals its end. 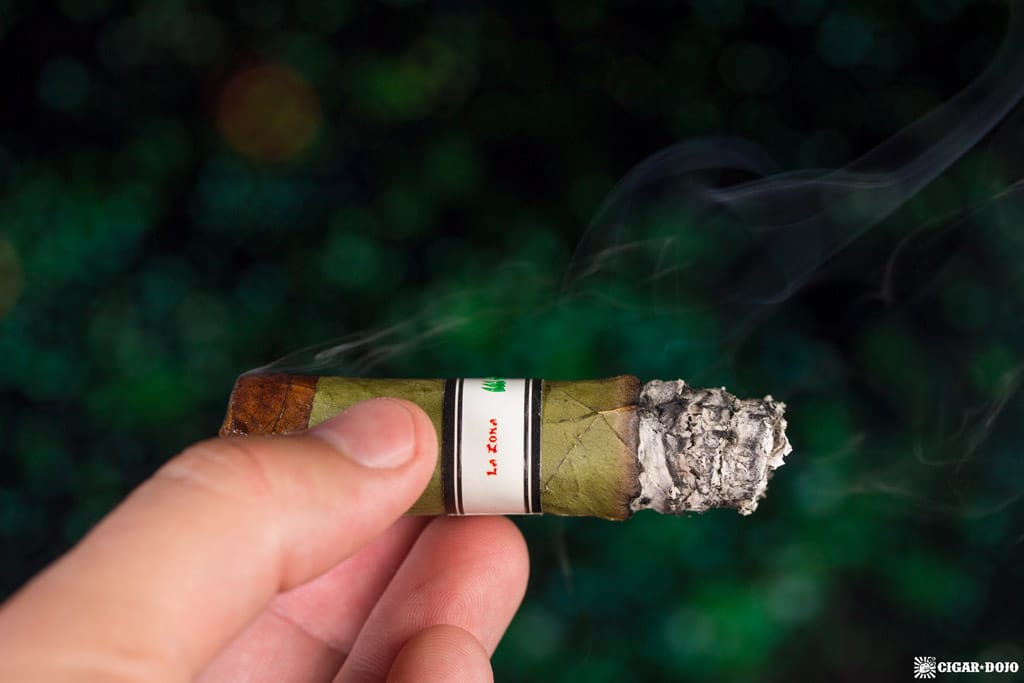 You’ll probably never hear me say this about a La Zona-made cigar again, but no. If you haven’t already heard, candela-wrapped cigars aren’t for everyone—I happen to be a member of this camp. Don’t get me wrong, Wasabi was certainly unique—being perhaps the spiciest (as advertised) candela I’ve smoked to date—but the lack of any form of sweetness or complexity gives me little reason to return.

In my opinion, I almost hesitate to call candela-wrapped cigars “premium,” as the leaves are flash-cured in a matter of days, forgoing much of the conventional curing process, as well as fermentation and aging. I think the leaves may have their place—perhaps when used in conjunction with secondary wrapper—but when used alone, there’s such a lack of complexity that the smoke is often very monotonous.

That being said, Wasabi did stand out due to its burning zest through the nostrils, and the La Zona team deserves recognition for taking the candela style into new territory. 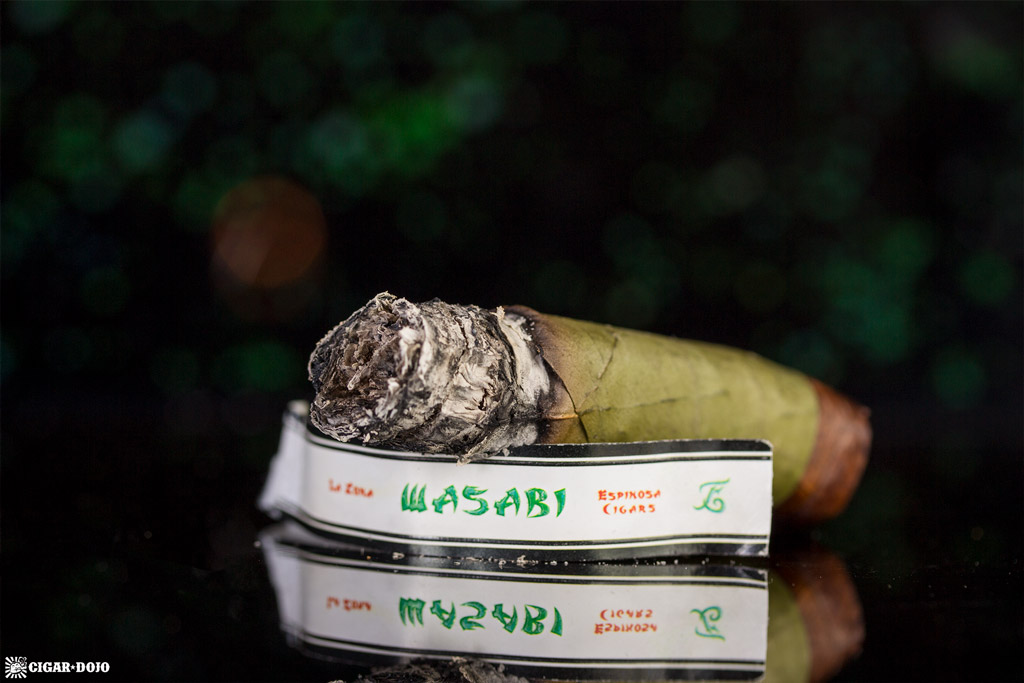 Espinosa Wasabi
The Espinosa Wasabi is the second candela-wrapped cigar from the company's La Zona factory (following the MoyaRuiz Pickle Juice), released as a limited edition cigar for 2018. The cigars are rolled in a singular size and described as "a spicy candela," veering from the conventionally sweet and grassy profiles of candela cigars. In my experience, the description was accurate, being one of, if not, the spiciest renditions of a candela-wrapped cigar I can recall smoking. Unfortunately, the cigar's spices don't manage to overcome the style's lack of complexity, offering little more than cabinet spices, barnyard hay, and grass. Overall, Wasabi's most entertaining factor is watching as the cigar's strength increases, wondering how much further it can go past the conventional candela profile of mild/medium. The answer is quite a bit (medium-plus), but this isn't quite enough motivation to win over the non-candela crowd, in my opinion.
Appearance89%
Burn/Construction91%
Draw88%
Flavor84%
Complexity73%
Price/Value88%
Pros
Cons
2018-06-22
86%Atypical