Crux Cigars occupied a long and slender booth location within the IPCPR trade show. The Crux brand has grown quite a bit over the past few years and their presence is now around the scale you would’ve seen with a brand such as Caldwell in 2015.

Crux picked up a good amount of steam at last year’s show, with their IPCPR-exclusive (Limitada IPCPR Show Exclusive 2016) receiving positive reviews and the Crux du Connoisseur gaining traction for the same reason. Crux expanded on both cigars for 2017, as well as an all-new brand (sort of) that falls in line with the refined/Cuban-inspired style of Crux du Connoisseur.

Epicure, like its Crux du Connoisseur sibling, borrows its nomenclature from Cuban Habanos cigars (e.g. Hoyo de Monterrey Épicure No. 2). The Epicure is the first Connecticut Shade-style blend for Crux and was actually on display at IPCPR 2016. Crux cited their promise to “not cut corners” as the reason for delay, wanting the cigars to perform at their absolute best before making their way to the public. In addition, the classically-geared Epicure arrived at the 2017 Crux booth with an all-new, 5⅜” x 46 Corona Gorda size—which was offered to retailers that purchased Epicure at the 2016 trade show before others had the opportunity. 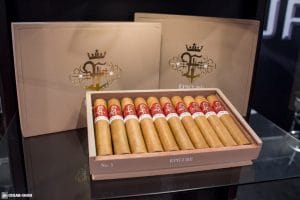 Similar in concept to show-exclusives such as L’Atelier’s Extension de la Racine, Crux Limitada IPCPR Show Exclusive 2017 is only available to retailers that attend the IPCPR trade show. While the Limitada IPCPR Show Exclusive 2016 was not sold, but rather given to retail accounts that made qualifying purchases, 2017’s version was available to all that were interested. The blend is based on Crux’s popular Limitada PB5 blend, making use the brand’s prized Nicaraguan Engañoso wrapper. Noticeably different is the cigar’s smaller, 5″ x 52 Robusto size, its box-pressed shape, and Crux’s signature Marblehead cap (based on the Cuban-style 109 head). Compared to the 2016 version, no changes have been made, arriving in the same size/blend. 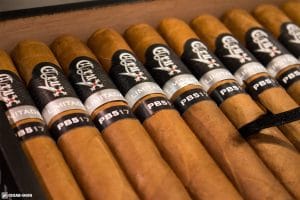