Let us begin, as we sometimes do, with a little bit of history. A little bit of history, which affects anyone who loves dining at white-tablecloth establishments prior to an evening’s enjoyment of fine cigars and premium spirits. On June 8, 1784, in the Seventh Arrondissement of the City of Lights, Marie-Antoine Carême was born into a large, poverty-stricken, Parisian family. At the age of ten, he entered into a six-year apprenticeship at Fricassée de Lapinan, an inexpensive tavern where he served as a gopher-boy and a dishwasher. In 1798, Antoine obtained a new apprenticeship with Sylvain Bailly, a famous pastry chef with a shop in the Rue Vivienne, near the Palais-Royal (a 1600s-era palace in Paris, France). Bailly encouraged young Carême to learn how to read and write, and he spent his limited amount of free time at the Bibliothéque Nationale, where he also became adept at drawing and sketching. Using his new skills, Antoine was able to reproduce the famous architectural works that he had seen in the books at the library using sugar and pastry—creating elaborate concoctions which Bailly then displayed in his shop window.

Over the course of the next three decades, Marie-Antoine Carême became one of the world’s first celebrity chefs, preparing menus for such esteemed patrons as Charles Maurice de Talleyrand-Périgord, Napoleon, the Prince of Wales (later king George IV), and Russian Emperor Alexander 1. In addition to writing a library of books on La Grande Cuisine Française, Carême is also credited with other significant culinary developments—the creation of the four classic French sauces, the implementation in the kitchen of the double-breasted chef’s jacket in white, the invention of the toque (chef’s hat) with folded pleats, the procedure of serving each dish in the order printed on the menu (instead of all at once), and the popularization of the soufflé. Carême died in 1833.

Now, let us fast-forward a century and switch to a point in history where Jon Huber (of Crowned Heads) and master cigar maker Ernesto Perez-Carrillo sat down to develop a new brand of cigars for introduction at the 2016 IPCPR trade show in Las Vegas. After a period of sample-manufacturing and tasting, they finally settled on a blend which Ernesto described by saying, “It tastes like a chocolate soufflé.” Ever the marketing genius, Jon Huber decided to name the cigars after Marie-Antoine Carême. 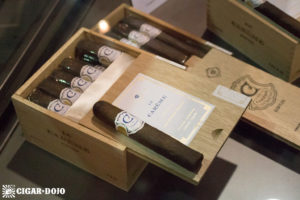 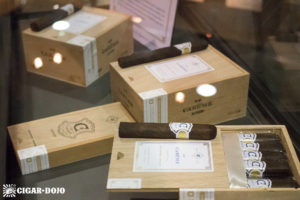 The Le Carême (pronounced “Kuh-Rem”) is the most recent addition to the Crowned Heads portfolio of cigars produced in collaboration with Ernesto Perez-Carrillo Jr. and his Tabacalera La Alianza S.A. factory, joining the brands Four Kicks, Headley Grange, and J.D. Howard Reserve. This new line of cigars is initially offered in four sizes—Cosacos (5⅜ x 42, $6.95), Hermoso No. 1 (6½ x 48, $8.75), Robusto (5 x 50, $8.25) and Canonazo (5⅞ x 52, $8.95). The vitolas are shipped in boxes containing twenty-four cigars.

Composed of three distinct tobaccos from three different countries, the blend is reputed to deliver notes of a chocolate soufflé. 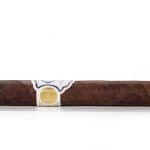 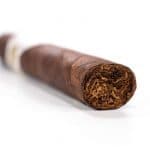 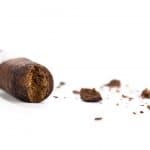 The Le Carême Robusto from Crowned Heads is a box-pressed cigar with a haphazardly-applied cap, its edges slightly rounded in the Cuban tradition (which is sometimes termed trunk-pressed or Spanish pressed). Its Connecticut Broadleaf Grade A Dark wrapper is rather rustic looking—having prominent veins, visible seams, a bit of tooth, and sporadic, circular splotches, resembling bourbon-glass ring stains on a battered coffee table. The color of the vitola is dark chocolate with wavering highlights of kobicha and russet. Medium-light in the hand, the cigar’s slight oiliness produces a discernible sheen in the noonday sunlight, like a freshly-licked licorice stick.

The robusto is equipped with a lovely and traditional blue, gold, and white band, featuring an embossed shield, containing a large cursive “C”, with the words “Le Carême” underneath. A gold crown medallion is printed on the band to the left of the shield, while a three-star medallion occupies the right side. Very firmly packed from the foot to the cap, the wrapper aroma combines natural tobacco, cedar, and tilled earth with an extremely subtle sweetness, while the open foot smells of barnyard, earth, hardwoods, and a slight hint of powdered chocolate.

After the robusto is opened with a substantial V-cut—which reduces the risk of damaging the the cap on a box-pressed cigar, compared with using a guillotine cutter—the cold draw is a bit tighter than desirable. Flavors and aromas of cedar, leather, and natural tobacco immediately touch the palate, while an overall spiciness formulates on the upper and lower lips.

After toasting and lighting the cigar with a double soft-flame lighter, the first draw is quite rough—full of pepper and spice with a strong dose of minerality. As the robusto settles into the burn, the cigar begins to produce the more normal characteristics of its composition—Connecticut Broadleaf wrapper surrounding long-leaf filler from Nicaragua. The draw of the Le Carême is a tad on the tight side, with a below-normal amount of smoke production. Flavors and aromas primarily consist of natural tobacco and peppery spices, with almost imperceptible nuances of cedar, coffee, and black cherry; while a blend of white and red peppercorns is dominant on the retrohale. Both the body and strength of the cigar falls into the medium to medium-full range.

As the robusto enters into the second-third, the draw begins to tighten even more—requiring quite a bit of effort to keep the cigar burning properly. The initial flavors and aromas are slightly enhanced, with the very subtle taste of a chocolate soufflé flirting though the profile for several minutes, before completely disappearing. The cigar soon transforms into a rather dry and unsweetened smoke, requiring unusually frequent sips of San Pellegrino (my preferred beverage when reviewing cigars).

Room aroma is reminiscent of a charcoal-fueled fireplace, in which purloined love letters are tossed into the flames at random intervals. The burn line is razor sharp, holding one and one-half inches of platinum ash, highlighted with narrow lines of gunmetal between the tightly compressed stacks. On the retrohale, the initial blend of white and red pepper strengthens to eye-watering levels of black pepper with a tinge of ammonia.

As it burn through its final third, the draw of the Le Carême Robusto opens up, producing copious amounts of dense smoke. Aromas and flavors diminish to just natural tobacco, minerals, and assorted spices, while an overall bitterness becomes predominant as the cigar approaches its final inch. Near the nubbing phase, the wrapper begins to pull away from the cigar. After a few additional puffs, the robusto is placed in an ashtray and allowed to extinguish. 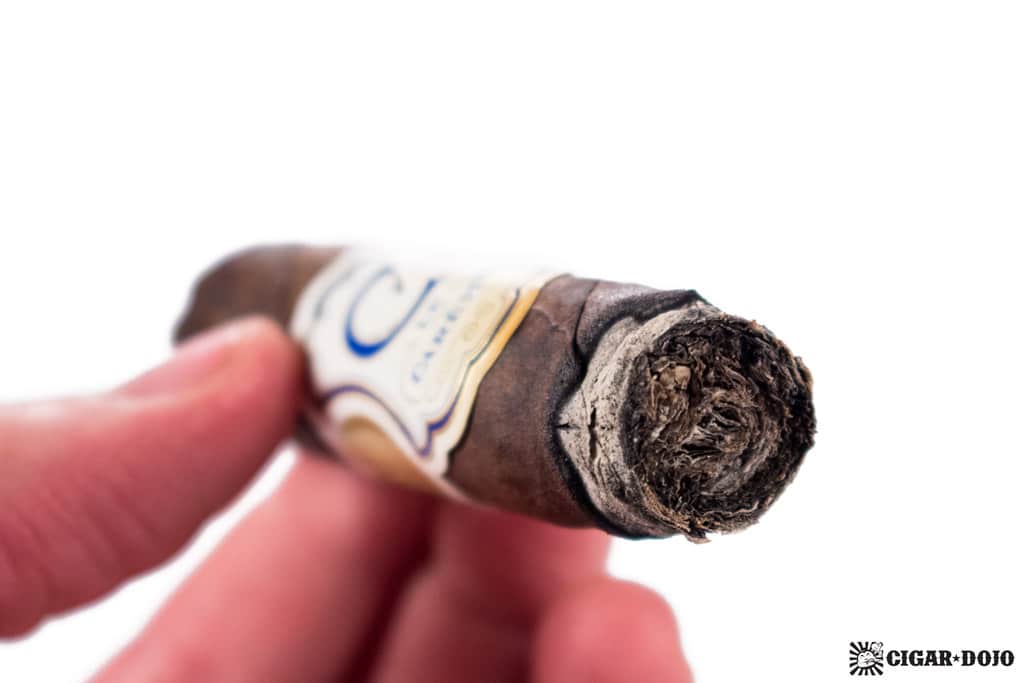 The answer to that question is, “Not anytime soon.” The marketplace is currently filled with competitively-priced Connecticut Broadleaf cigars utilizing filler tobaccos from Nicaragua that provide the enthusiast with much more enjoyable smoking experiences. And when it comes to currently-available cigars from Crowned Heads, I will light up a Las Calaveras Edición Limitada 2016 over the Le Carême any day of the week (or, for a more preferrable experience from the same Crowned Heads/Carrillo duo, The Angel’s Anvil TAA 2016 does the trick). 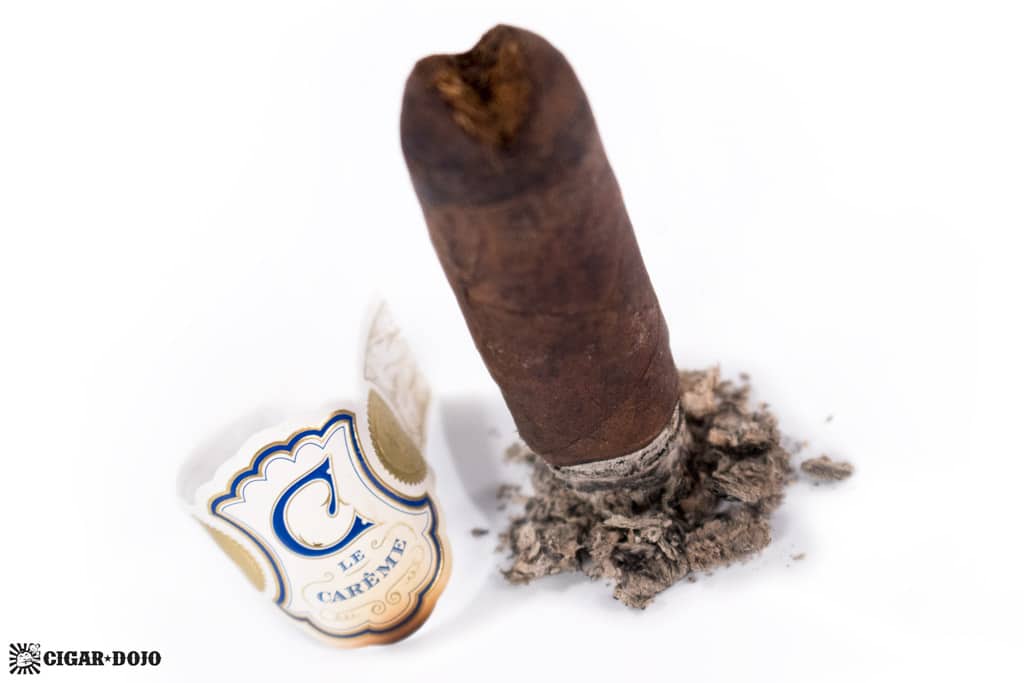 Crowned Heads Le Carême Robusto
The Le Carême is the most recent collaboration between Crowned Heads and Ernesto Perez-Carrillo. Constructed with a Connecticut Broadleaf Grade A Dark wrapper surrounding an Ecuadorian Sumatra binder with long-leaf filler from Nicaragua, this new line is named in honor of Marie-Antoine Carême—one of the world’s first celebrity chefs. While the cigar is described by the company to, “Taste like a chocolate soufflé,” that flavor existed in a barely-discernible quantity, which lasted for only several minutes. Otherwise, the Le Carême robusto delivered sub-par flavors and aromas of natural tobacco, pepper, and minerals—eventually transitioning to a simple experience with a bitter and rough finish.
Appearance86%
Burn/Construction87%
Draw85%
Flavor82%
Complexity80%
Price/Value80%
Pros
Cons
2016-12-16
83%Humdrum