Just ahead of this year’s 2016 IPCPR show, Quesada Cigars has announced the lineup for their popular Oktoberfest cigars—an annual release featuring cigars made to pair with Märzen-style beer (Oktoberfest beer).

The cigars were first introduced in 2011 and regularly been updated/tweaked for each year, often showcasing new sizes and slight blend variations. 2014 saw the introduction of redesigned bands, 2015 introduced a sub-band to distinguish the cigar’s release year, as well as the addition of a Nicaraguan version of the blend.

Quesada also announced they will be producing limited edition, 100-ct humidors to coincide with the cigar’s release this fall. Shaped in the form of a Bavarian-style “brauhaus”, the humidors are sequentially numbered and will be raffled by select Quesada retailers at special Oktoberfest events this fall.

“Each year it gets increasingly difficult to top the previous year’s Oktoberfest promotion, but we are confident these stunning humidors will bring a new level of excitement to our 2016 Oktoberfest events.” 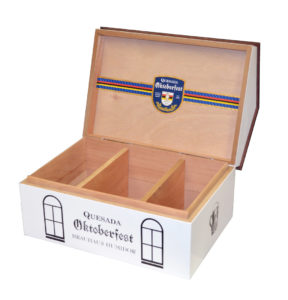