Foundation Cigar Co. was officially unveiled to the public a few months ago, making their debut at the 2015 IPCPR show. This was a highly anticipated move for those that follow the brand’s creator, Nicholas Melillo, aka Nick~R~Agua.

Nick entered the cigar industry in the ’90s, running a local brick & mortar in the New Haven, Connecticut area. Nick became well-acquainted with the newly-formed Drew Estate, selling the Drew Estate La Vieja Habana at the shop. Building a close relationship with Jonathan Drew over the years, Nick was offered the opportunity to be Jonathan’s right hand man in Nicaragua in 2003. He helped run the DE factory, setting standards for quality control and even began blending his own cigars in his spare time.

Inspired from his roots in the Connecticut region, he began playing around with Connecticut Broadleaf—ultimately he crafted 10 blends to be tested by Steve Saka, the newly-appointed president of Drew Estate. These blends not only included the legendary Liga No. 9 blend, but UF-13, and JD4 as well. Nick’s portfolio eventually grew to include classic DE cigars such as Liga T52, L40, Dirty Rat, Feral Flying Pig, Nica Rustica, and one that holds special meaning to Cigar Dojo—Undercrown Dogma.

Nick left Drew Estate in early 2014 to pursue his own projects, which have now been realized in the form of Foundation Cigar Company. Foundation has established itself in Nick’s “new home” of Estelí, Nicaragua. After nearly 11 years of uninterrupted time in the country, he felt it only appropriate to honor the native Nicaraguan culture in the brand’s first release—El Güegüense. 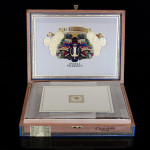 El Güegüense (pronounced “way-when-say”) translates to “The Wise Man”, which is Nicaragua’s signature folkloric masterpiece. The first literary work of post-Columbian Nicaragua, the theatrical play/dance was born as the indigenous Nicaraguans mocked arriving Spanish conquistadors with colorful, satirical costumes—the work is an integral part of Nicaragua’s history and culture, and continues to this day.

Foundation’s first cigar project draws inspiration from both Nicaragua and “The Wise Man”; using a Nicaraguan puro blend, decorated in bright, colorful packaging. Costumed characters from the El Güegüense show are displayed throughout the cigar’s packaging, accompanied by matte finish bands using bright blues and greens, and highlighted with gold accents. The ornate design may be too much to take in when viewed in photos, though we found the cigars to look quite nice in person.

Floral notes emanate from the cigar’s well-constructed wrapper—a rustic, colorado-hued exterior shows prominent veins with light seams. The first puff starts the cigar off with a zing! Full flavors rush through the retrohale with a good amount of spice and even a nice zest over the tongue. A few more puffs allow the underlying profile to come through—warm flavors of cedar, musk, butterscotch, and a hint of toffee begin to develop throughout the first third.

The body is medium and the flavors are full, so much so that you find yourself chewing the smoke, trying to expose everything it has to offer—just missing the last few notes on each puff (seriously, there’s a lot to find here). Occasionally this causes some overheating, making for some harsh notes, like burning wood. As imagined, the profile is distinctly Nicaraguan, with a good amount of spice, chocolate, and anise.

The cigar needed a touchup in the second third, as well as a relight at the halfway point. Here, the cigar becomes less intense in the retro, pulls back to a medium-full in flavor, and increases in strength. The flavors can still be described as warm, with notes of Graham crackers, toasted bread, and cherry cola—the retrohale is slightly spicy, with floral notes that sometimes come across perfumey. The final third carries these similar components to the end, never becoming too dark or harsh, with smooth and easy-going, classic habano notes up ’til the end.

Without a doubt. Nick has created a hit on the first go-round with Foundation, completely living up to the hype, even outdoing my expectations, I might add. This is a multiple box-worthy smoke in my opinion. 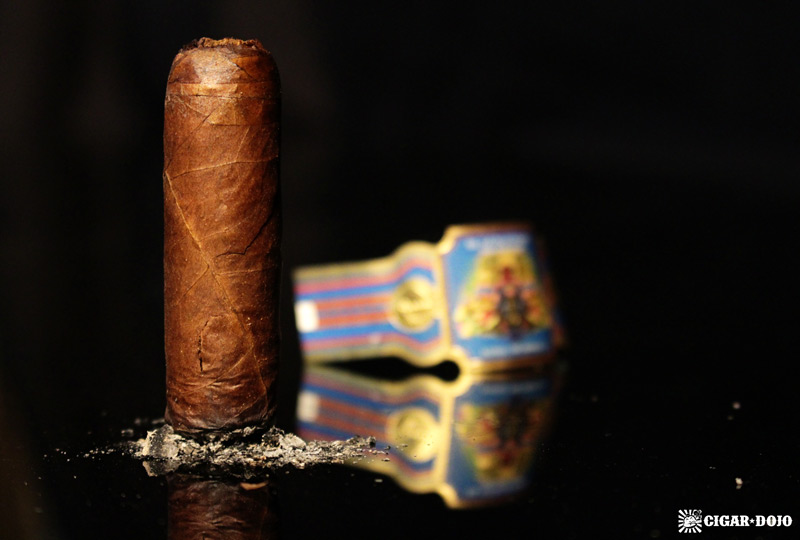 El Güegüense by Foundation Cigar Co.
El Güegüense smokes like your classic, Cuban habano, with a hefty dose of Nicaraguan oomph—"A habano on steroids," you may have found me describing the cigar while smoking my (many) samples for review. Also worth mentioning is the cigar's great construction, with a pleasing draw and long smoke time (1.5-2.5 hours, depending on size). I found that the sweet spot was throughout the second third. My recommendation is to buy the corona gorda size—which had similar flavors, only more of them.
Appearance90%
Burn/Construction88%
Draw92%
Flavor100%
Complexity90%
Price/Value92%
Pros
Cons
2015-10-12
92%Habano on steroids