Southern Draw Cigars is making a name for themselves, bringing back the concept of “Southern Hospitality” and values from life in the south. Respecting your fellow neighbors – where men can be men – and the cultural respect for women, which they deserve. These are all highlights from the Southern Draw fellowship and a big part of their mission to bring quality smokes that make you understand what living in the south is all about.

Started by United States military veterans, they’ve partnered with the likes of A.J. Fernandez in Estelí, Nicaragua at Tabacalera Fernandez. Currently producing a quarterly limit of 15,000 sticks per blend, with three blends currently, including the Quick Draw, Firethorn & the Kudzu, which I’m writing about today. Kudzu is the original blend created by Southern Draw, which features an oily, box pressed, twice-fermented Habano Oscuro wrapper with premium Nicaraguan aged tobaccos.

Before lighting up a cigar, I try to form an opinion of what i’m about to smoke. It’s a fun little game I play, trying to see how any preconceived notions might be different from the actual experience. In this instance, I could tell by the firm, yet evenly rolled, almost lightly twisted, box-pressed Toro – this was going to produce a good volume of smoke. The pre-light aroma hinted at being on the lighter side of medium body. If I was betting money on this, I would’ve said it was of 100% Dominican origin. Boy was I wrong on that.. As it turns out, I guess 2 out of 3 isn’t bad!

I’ve become a huge fan of box-pressed cigars over the years, as most of the time the draw you get from these is impeccable. This one follows suit. With a closed foot, you never want to toast it prior to first light. This ensures you get that entire flavor of the wrapper first and foremost as intended by the manufacturer. An earthy aroma and notes of cedar are brought to the front before lighting, and the closed foot allows that to be the main focus initially. There is a sense of bitterness on the lips from the oily Habano Oscuro wrapper. 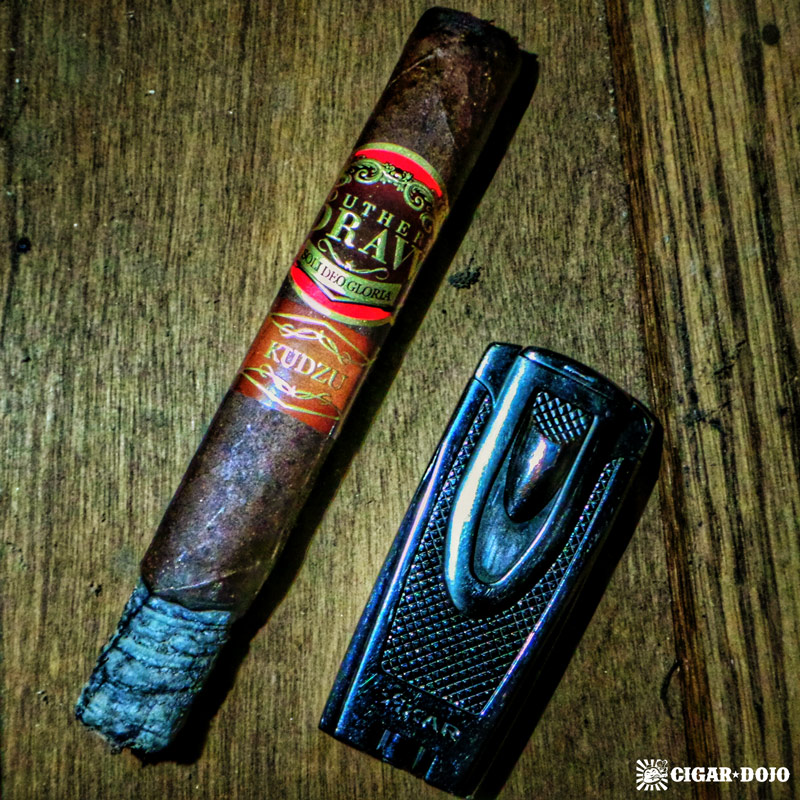 This particular stick showed a rare level of consistency in flavor profile from start to finish. It was interestingly not a bad thing, considering the character didn’t change much. While it wasn’t the most complex smoke, it had good flavor & wonderful construction. Knowing, from the start, what you’re going to end up with isn’t always bad, especially if it’s good from the beginning.

Easy draw – sometimes felt a little too easy but it never took away from the pleasure of this experience. Lots of smoke as well – one of my favorite parts to enjoying a quality stogie, there was no disappointment here. A beautiful light gray, almost white ash gathered up to an inch or more before it gave way. You’re gonna have a hard time winning a long ash contest with this one, as it doesn’t pack the tightest roll but that allows for the smooth draw and large volume of smoke. Strong notes of cedar appeared to be the focus for the entire length of the cigar. A very woodsy flavor kept me longing for a campfire outing in a national park somewhere, roasting s’mores with my favorite craft beer. 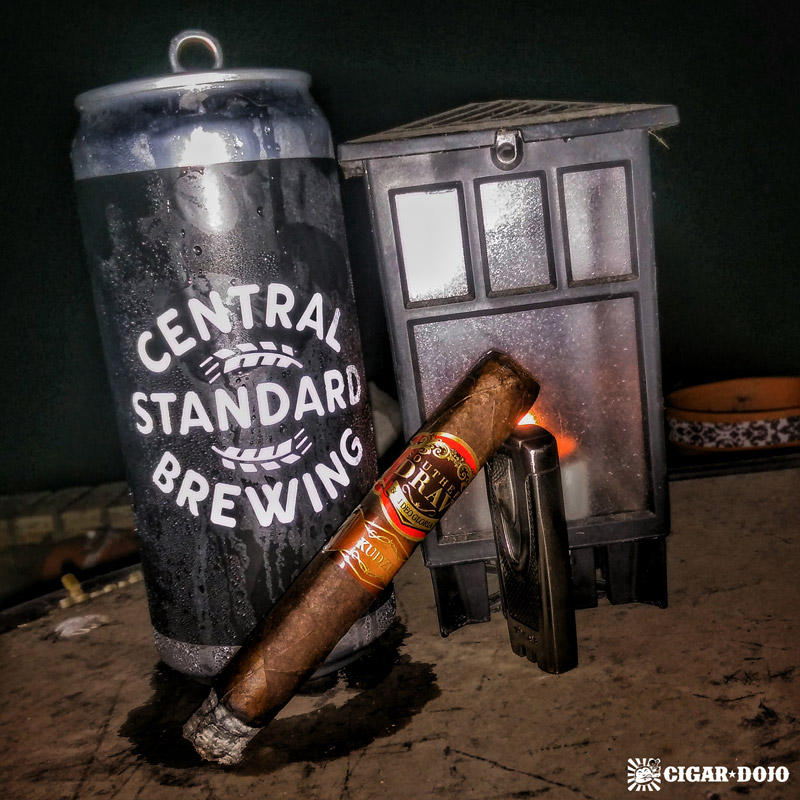 Cigar Pairings
While researching this cigar, something about the folks at Southern Draw really caught my eye. On their website they list likely pairings of craft beer, wines, and spirits. This isn’t something most manufacturers are doing these days, but being the craft beer connoisseur that I am, it was intriguing. A good pairing of a nice premium boutique cigar with some of your favorite beverages really brings it all together. It worked out perfectly for me, as I recently acquired a “Crowler” (you read that right!) of the Standard Model Dry Hopped Sour Ale from our brand new local craft brewery Central Standard Brewing. This new crowler concept is just freakin’ awesome – 32oz of your favorite beverage in a can, sealed at the brewery bar and ready to take home! But I digress…

In my opinion, pairings can go a couple different ways. First, you can try to pair similar flavor profiles together in an attempt to maximize specific characters of the pair. The other way to do it is by contrast, finding flavors that really bring out each profile respectively. On one hand you’ve got a dry hopped sour, sitting out in left field in a world of it’s own. On the other you’ve got a premium cigar with a slight bitterness & strong cedar profile. The contrast of these two really allows all the bold flavors to stick out and rise up against each other. Be ready for a palate-shocking experience if you choose to go with the latter. Overall, I applaud the efforts of Southern Draw to suggest pairings for their fans to try.

Yes I would. I’d be curious to see if the consistency stays from stick to stick. I also look forward to trying a couple of the other offerings from Southern Draw, as this was a very pleasant experience. Cheers to the folks at Southern Draw, keep up the great work! 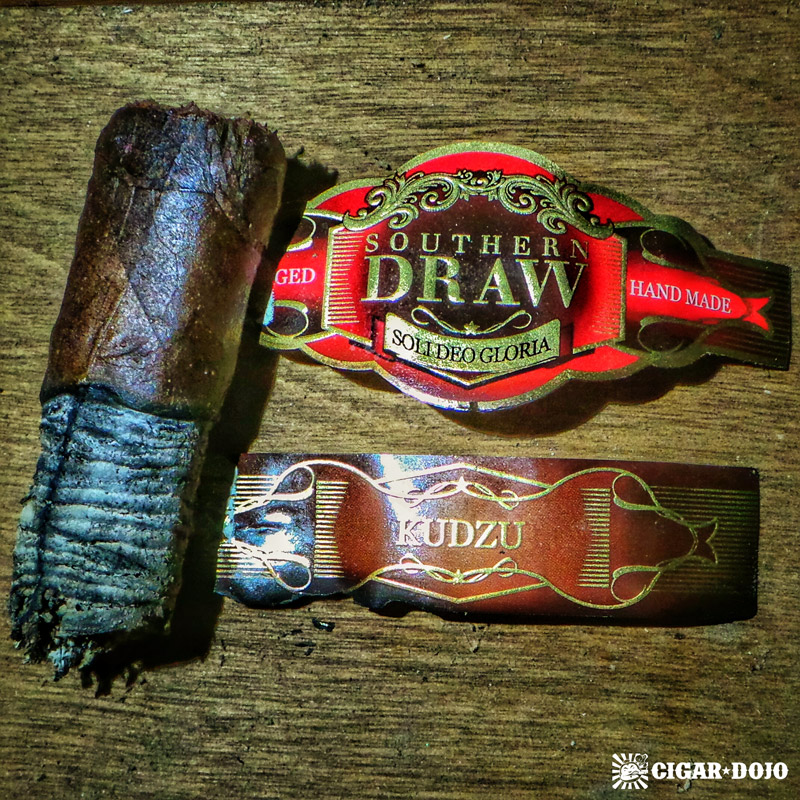 Southern Draw Kudzu
Consistency... You can take that to the bank with this one! From beginning to end you'll get a nice, flavorful, well constructed cigar that fits the bill for what we've come to expect in the world of boutique cigars. Partnering with A.J. Fernandez is never a bad decision and helps lend credibility to the folks at Southern Draw for going with an industry-famous production facility with some of the best tobaccos in the world. As you can see, I nubbed this guy to the end and very much look forward to my next cigar from Southern Draw.
Appearance90%
Burn/Construction100%
Draw88%
Flavor90%
Complexity73%
Price/Value85%
Pros
Cons
2015-08-11
88%Consistent
Reader Rating: (18 Votes)
51%