Warped Cigars burst on into the cigar market in 2014 with the release of their El Oso line of cigars. Shiny, new company with a shiny, new cigar, right? Almost. Warped Cigars first began making cigars in 2008 in a small, family-owned factory in Miami’s “Little Havana” district. That venture was short lived however. In 2012, Kyle Gellis brought back Warped as a company that produced cigar smoker’s research/review notebooks and cigar accessories. But just making cigar do-dads wasn’t enough for Gellis, so after investing more time and money, he brought Warped Cigars full circle when he released the El Oso line. Originally, the line consisted of two cigars – Cub (4 x 44) and PaPa (6 x 48 Belicoso). Subsequently, Gellis released an extension to the original line, MaMa (7 x 38), a long panatela with a Mexican San Andrés wrapper.

For this review I chose the PaPa. When I first saw this cigar in the shop, it immediately caught my eye. This is one stunning cigar to see, from the beautiful Colorado-colored wrapper, to the perfect, and I mean perfect, rolling job that is exemplified by the smooth transition from the barrel of the stick, to the belicoso tip. This attention to quality doesn’t surprise me either, knowing it, and all El Oso cigars, are rolled at the El Titan de Bronze factory in Little Havana. El Titan employs Cuban, ex-pat Level 9 rollers – that includes Maria Sierra, who, now in her mid-60s, has been rolling cigars since she was 18, when she was trained by Fidel Castro’s personal cigar roller, Eduardo Rivera.

Pre-light due diligence results come back favorable. Barnyard and hay off the Ecuadorian Habano Oscuro wrapper and sweet cocoa off the foot. The filler of Dominican and Nicaraguan tobaccos feels properly packed, which again is to be expected, as these cigars are rolled with the Cuban entubado style of tubing the filler tobaccos into the bunch. A few light veins thread their way across the cigar, that do nothing more than give the cigar character.

What a wonderful cigar. I’m not going to make you wait for my final thoughts – it is a terrific cigar! The negatives first… the burn line is a bit wavy. That’s it. And it’s not an issue, it catches up just fine, no touch-ups needed.

It starts off with cedar and oak. As it progresses, it shows a great deal of cocoa and anise. There is a bit of white pepper spice, but really it is a clean, smooth smoke. Continuing, it adds a very nice honey sweetness. Towards the mid-point the cocoa backs off and the honey sweetness takes the lead. That’s it. That’s the cigar right to the nub. And I couldn’t be happier. 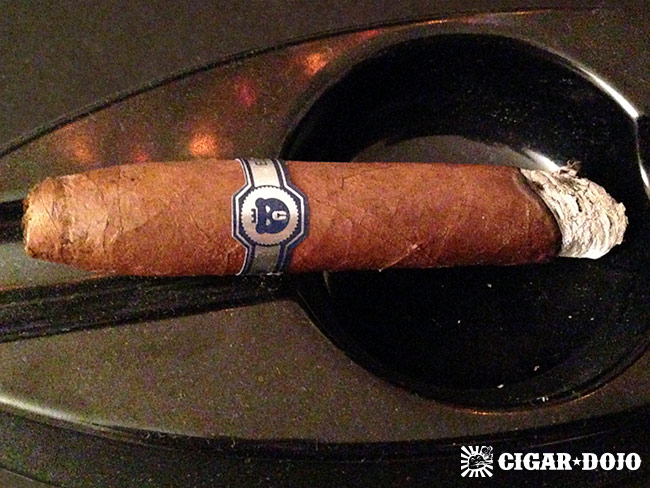 I would. This price point is a bit high, I bought this one for $16 (though they can be found for $11), but for a medium strength, medium body cigar that gives easily 90 minutes of pleasure, it is well worth it! Huge kudos to Mr. Gellis. Find’um and get’um, Dojo family. You will not be disappointed!

Warped Cigars El Oso PaPa
I enjoyed this cigar from beginning to end. No harshness in the initial half inch and no loss of flavor in the end. Gellis had a vision and in fruition it was a solid smoke.
Appearance95%
Burn/Construction86%
Draw90%
Flavor94%
Complexity91%
Price/Value81%
Pros
Cons
2015-02-03
90%Clean, smooth smoke
Reader Rating: (8 Votes)
68%