Wondering what “the cigar” of the year is going to be? If you’re like me, you’re always on the hunt for the next “it” cigar, the one people are going to be talking about; something new, something bold, and that will grab your attention. Lucky for us, there’s a new Liga Privada cigar release this year, i.e. this year’s search just got a lot easier.

Now of course I’m not going to blindly crown this new Liga Privada as 2013’s cigar of the year, after all, there are many others to be excited about. But I can tell you this: the UF-13 Dark is frickin’ tasty! Now let’s get the specifics and details out of the way, and become acquainted with Drew Estate‘s newest offering, which is called the Liga Privada Único Serie UF-13 Dark (it’s a long one), by the way. This is a robusto sized (5.5 x 52) vitola with a deep, dark Connecticut Broadleaf wrapper. It is billed as a “stronger Liga”, and uses stalk-cut tobacco; a technique used in a few other Liga Privada cigars that allows the tobacco leaf to feed off the base of the plant while fermenting, creating stronger, more robust flavors.

Incase you’re wondering, this cigar has gone through many iterations throughout the past couple years, with multiple different names, sizes, and shapes. You may see it listed as the MF-13, UF-13 (Único Fuerte), and the official UF-13 Dark (among others). The finished product also comes with a really cool pigtail/fan cap that you won’t find in my pictures, as the cigar I smoked for the review was from an earlier release. In any case, all iterations of the UF-13 feature the same blend and will smoke the same.

This is a cigar I had resting in the humidor for many months, debating weather it was better to let it age and acclimate, or smoke it right away and have an early review up. As I’m sure you’ve surmised, my taste buds lost that battle, as I forced myself to wait for just the right moment. I know I cried a little on the inside as I removed my lone UF-13 from its fellow Ligas in the humidor, but like many good cigars before, its time had come.

Holding the UF-13 Dark, you’ll notice a significantly dark wrapper, it has seamless veins, with dense, quality construction – a Liga Privada no doubt. I didn’t get much on the nose, light notes of leather and chocolate identified themselves through the foot; but to be honest, some of my favorite cigars don’t have the most noticeable smell (Padron 1926). On the pre-light draw, chocolate flavors abound, along with what I would describe as the perfect draw – there’s no turning back now! 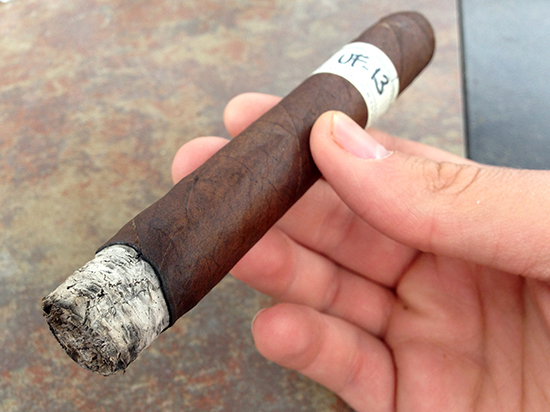 As with the pre-light draw, it’s chocolate that I notice right away – creamy, chewy chocolate. But this isn’t a one-dimensional smoke, just when you think you’ve got this thing figured out, you don’t. Through retrohaling the smoke, you’ll find an intense blast of roasted coffee beans, it’s safe to say I’m pleased thus far. And as with all Liga cigars, this thing spews (yes, spews) smoke, even when you’re not puffing! As the flavors develop, there are added notes of anise, organic spices, and what I believe to be malt (Whoppers malted milk balls come to mind).

Moving past the 1/3 mark, I noticed the chocolate and coffee pulling back, making way for new and more intricate flavors. There is an added, freshly cracked pepper zing to the smoke, which I found reminiscent of the Liga Privada No. 9 profile. It actually felt like a darker, more intense Liga #9 at this point; and yes, this thing has some kick to it (which I was really starting to feel nearing the end)! A savory, oily smoke followed the pepper, which tasted just as good as it sounds! All the while the cigar was burning perfectly, with a clean, toothy, white ash. Nearing the end, the anise makes a comeback, which isn’t my favorite flavor, but I found myself really enjoying it down to the last puff.

Every chance I get! Being a Único Serie cigar, these aren’t the easiest smokes to come by. Just be sure that if you do come across the UF-13 Dark, buy as many as you can afford, you’ll thank me later. Priced at around $15, this isn’t going to be your daily smoke, but it is worth noting that I smoked this robusto for nearly two hours! You can even think of this as two, tasty, $7 sticks if you like… though I can’t promise your wife will accept that logic. 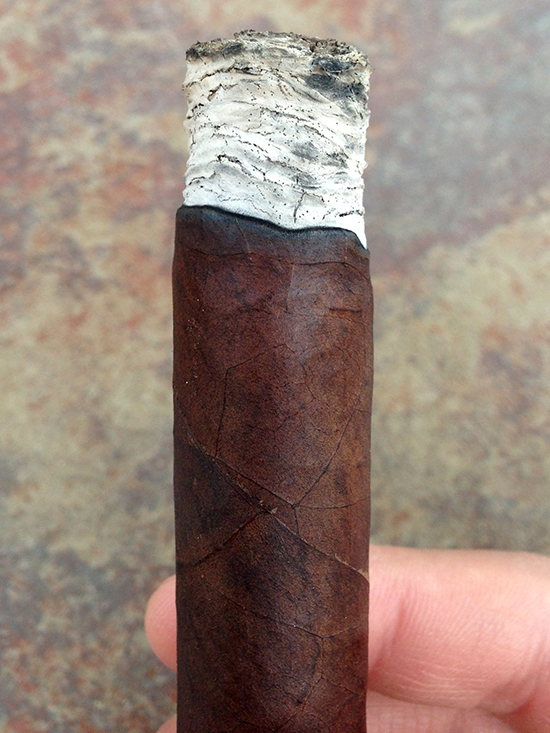 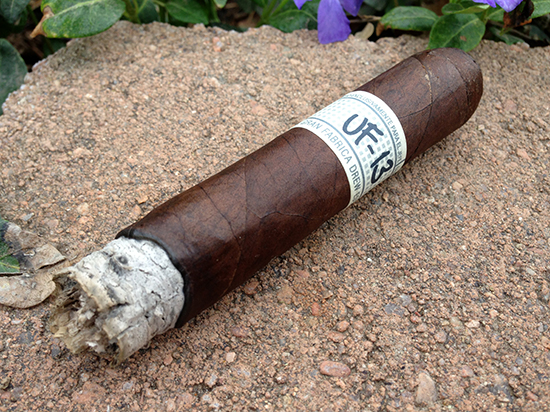 Liga Privada UF-13 Dark
This super long burning cigar will give you all the flavor and strength you could ask for.
Appearance89%
Burn/Construction89%
Draw89%
Flavor93%
Complexity90%
Price/Value90%
Pros
Cons
2013-05-15
90%Full Strength